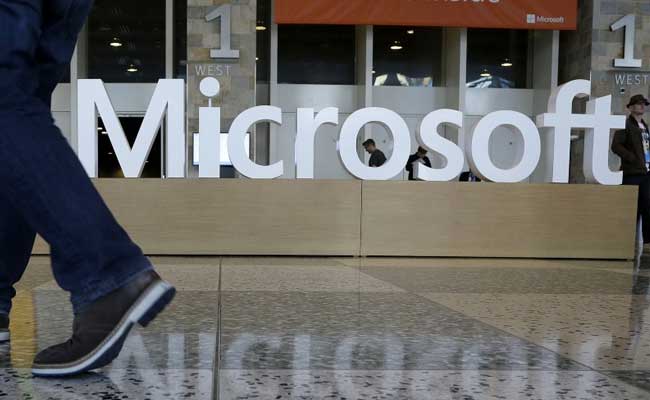 Microsoft launched a new consumer offensive Wednesday, unveiling a high-end computer that challenges the Apple iMac along with an updated Windows operating system that showcases three-dimensional content and "mixed reality."

The US tech giant announced its first desktop computer, called Surface Studio, a $3,000 high-end "all-in-one" device that aims at creative professionals, a segment dominated by Apple.

"We're creating a new category that transforms your desk into a creative studio," Microsoft chief executive Satya Nadella said at the unveiling in New York.

With a large, 28-inch (71-centimeter) hinged touchscreen display touted as "the thinnest desktop monitor ever created," Surface Studio adds to the Microsoft lineup of tablet and laptop devices for the premium segment.

"It is a new class of device that transforms from a desktop PC into a powerful digital canvas, unlocking a more natural and immersive way to create on the thinnest display ever built," said Microsoft vice president Terry Myerson,

The new PC has an ultra-HD 4.5K display, offering more pixels than most new high-definition televisions. It will be available in "limited quantities" for the upcoming holiday season, with more units available in 2017.

The new device drew a mixed response from analysts.

"Yes, this is very cool. But what's the market for a $3,000 computer you can draw on? How many people have that job?" asked Benedict Evans of the venture firm Andreessen Horowitz in a tweet.

But Avi Greengart at the research firm Current Analysis said the new Microsoft products "are aimed at setting the high mark for the Windows ecosystem."

Microsoft also announced an updated Surface Book -- its high-end convertible tablet-computer -- which will sell for $2,400, adding improved graphics and computing power and with an estimated 16 hours of battery life.

The Surface devices allow users to create content onscreen with a special pen-stylus, and Microsoft introduced a new disk device called Dial which attaches to the screen and offers additional controls such as viewing the timeline of a creation.

Microsoft meanwhile announced its Windows 10 Creators operating system would be offered as a free update in early 2017, enabling users to create 3D content and delve into virtual and augmented reality.

The update will allow for a 3D capture application for mobile devices and a new version of the popular program Paint for 3D objects.

The system will allow users to add three-dimensional emojis and to create and manipulate content they create or scan.

Microsoft general manager Megan Saunders demonstrated how the capture application can scan a sand castle in three dimensions, and then mix that with other content.

With the new Windows system, users will be able to experience virtual reality with Microsoft's HoloLens headgear and its Edge browser.

Edge "will act as the portal to display 3D content on HoloLens," said Saunders.

Microsoft said its hardware partners would be selling Windows-compatible virtual reality gear starting at about $300.

Microsoft is aiming to keep users on Windows as many switch to new mobile devices powered by Apple or Google software.

"I like where Microsoft is going with Creators Update as it reflects PC differentiation and includes elements of what I believe consumers are interested in, albeit hard to execute upon," Moorhead said.

The analyst added that "3D creation is difficult today and Microsoft is taking initial steps to bring it to the masses."

With PC sales sputtering, Microsoft has been emphasizing its cloud computing and business services but is also working to stay relevant to consumers with Windows and its various computing and gaming devices.

Promoted
Listen to the latest songs, only on JioSaavn.com
The new version of Windows will help users sift through email and other messages by creating "people" icons that show messages from important connections.