Mentor Of Samsung Scion Seen Stepping Up After Lee Arrest 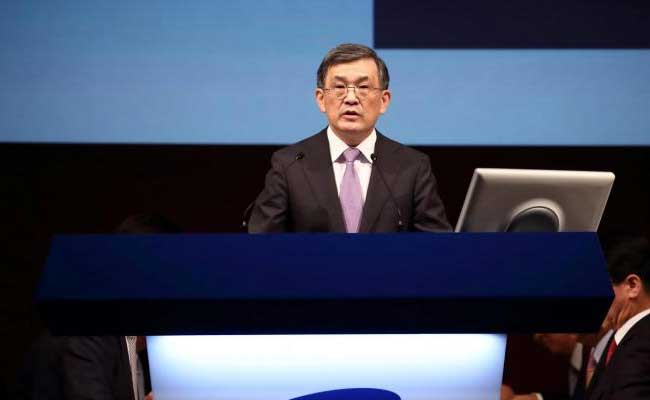 SEOUL: The arrest of Samsung Group scion Jay Y. Lee on bribery charges could hamper decisions on strategic investments and acquisitions at the sprawling conglomerate, insiders and former executives say, even with strong leadership at its many businesses.

Although business at flagship Samsung Electronics is humming along, big calls will need to be made and the man most likely to be called upon to make them is Choi Gee-sung, the top lieutenant at Samsung Group and a mentor to Lee.

"Choi is very experienced and has done a good job. He is the one best placed to manage group-level affairs in Lee's absence," said one Samsung insider.

While Samsung Electronics is still smarting from the debacle of its exploding Galaxy Note 7 smartphone batteries, its semiconductor business is in rude health. Its share price has risen about 60 percent in the past year.

But the wide-ranging investigation, part of a corruption scandal that led parliament to impeach South Korean President Park Geun-hye, has been a major distraction for the country's largest conglomerate, or chaebol.

"Everything has virtually stopped," said a second executive at Samsung Group's powerful strategy office that Choi heads. "We're mainly focusing on the prosecutor's investigation (into Lee and Samsung) ... We'll be running an emergency plan and everything will be under Choi's control for now."

But some others say even Choi's role could be limited and Samsung may have to rely more on each affiliate's top management, with Choi also under investigation by special prosecutors.

"Since we've decided to dismantle group strategy office, Choi's role is likely to gradually decrease, although we can't say for how much and when," another Samsung executive said.

A fourth group insider said: "We have a system in place with professional management teams, so in terms of the day-to-day operations things should be fine."

None of the Samsung individuals wanted to be identified due to the sensitivity of the matter.

"It's not like Samsung businesses will grind to a halt. There are many smart people at the company," said Kim Yong-serk, a former Samsung Electronics executive who is now a professor at Sungkyunkwan University.

But the arrest of Lee, 48, will have an impact on longer-term investment decisions at the conglomerate.

"Samsung presidents are evaluated on an annual basis, so they can't make bold bets about the future. They need a chairman for that," Kim said.

Samsung declined to comment on its management plans or Choi's role.

When Samsung Electronics trailed Nokia in mobile phones - just five years ago - Choi, then CEO, set his sights on a different rival.

"Competition is coming from elsewhere. There's a company more profitable than us and we should change our target," he told Reuters in January 2012, referring to Apple Inc.

In a Samsung career spanning more than three decades, Choi worked in all the main businesses, from semiconductors and home appliances to televisions and telecoms, before taking over as chief executive.

As head of strategy, 66-year-old Choi has acted as Jay Y. Lee's mentor and been closely involved in preparing the path for him to take over from his father, who was incapacitated by a heart attack in 2014.

Under Choi's guidance, Lee has moved closer to succeeding his father in a well-choreographed long-term plan, including a restructuring of the conglomerate to cement the Lee family's control.

However, that plan included a controversial $8 billion merger of two Samsung units that has been central to prosecutors' case against the group, and Lee.

Choi Gee-sung and his deputy Chang Choong-ki were quizzed by prosecutors over their role in the deal.

Known as "Mr Chip", Kwon has overseen the growth of Samsung's component business, which now generates much of the firm's profits.

"Mr Kwon is a very practical manager. Like many Samsung managers in the component business, he doesn't feel comfortable (in the limelight)," said an executive who worked with him.

But, for all the experience and qualities these senior managers bring, Lee's absence will be felt.

Lee had been instrumental in seeking to drive growth through new businesses, including signing off on South Korea's biggest outbound deal: an $8 billion acquisition of U.S. auto electronics maker Harman International Industries.

"The biggest problem is that Lee is the one who sets the direction of Samsung as a whole," the fourth group insider said.

Promoted
Listen to the latest songs, only on JioSaavn.com
"He doesn't get into every business decision, but he's the one who has to sign off on major investments or acquisitions ... That's why he can't easily be replaced."
© Thomson Reuters 2017