Buoyed by easy monetary policy, a gradual re-opening of the economy and a rapid vaccination drive, the Sensex has rallied nearly 20% year-to-date.

Indian equities will not recoup recent losses until after mid-2022 on worries over COVID-19 resurgence and global monetary policy tightening, according to a Reuters poll of strategists which showed a correction was likely in the next six months.

Buoyed by easy monetary policy, a gradual re-opening of the economy and a rapid vaccination drive, the benchmark BSE Sensex Index has rallied nearly 20 per cent year-to-date.

But the BSE index has dropped around 8 per cent from its all-time high of 62,245.43 set on October 19 as concerns mount over the Omicron coronavirus variant, dampening investor sentiment further.

"We believe the inflation fear combined with the rise in COVID-19 cases globally may continue to trigger corrective moves in the following months," said Ajit Mishra, VP Research, Religare Broking. 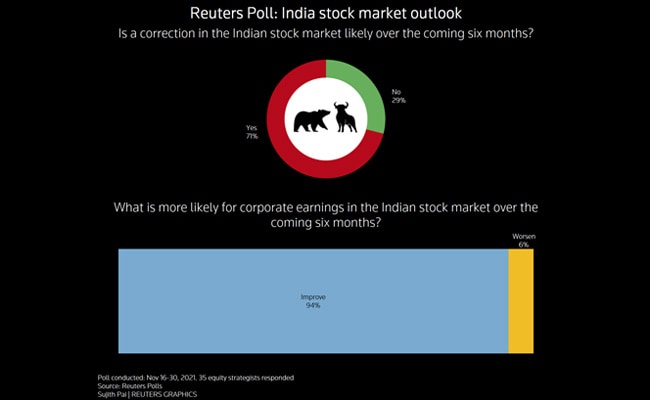 Like most emerging markets, Indian stocks have witnessed a heavy outflow of foreign investment - a key driver for domestic equities - over the past two months as expectations of tighter monetary policy across the globe pushed major bond yields higher.

Yields on the U.S. two-year Treasury note, which reflects short-term interest rate expectations, hit their highest level since March 2020 last week before their steepest daily fall in 20 months on Friday.

The Reserve Bank of India is forecast to hike its repo rate by 25 basis points in Q2 2022, its first increase in more than three years, lagging peers such as the Central Bank of Brazil and the South African Reserve Bank.

Nearly three-quarters of respondents to an extra question, 25 of 35, said a correction in Indian equities was likely over the coming six months, with the median at 10 per cent.

"We could see a 5-10 per cent correction for Indian markets as valuations adjust to the moderation in earnings momentum. The market also remains sensitive to risk for EM equities from strong (U.S.) dollar and higher bond yields," said Rajat Agarwal, Asia equity strategist at Societe Generale.

Despite those downside risks, all but two of 35 strategists said corporate earnings would improve further over the next six months. That view was largely driven by expectations of a strong rebound in economic growth.

"We expect corporate earnings to improve in India over the coming six months, as economic recovery gains traction, even though we believe the economic recovery will be slower than expected due to persistence of (high) inflation globally," said Sher Mehta, director at Virtuoso Economics.