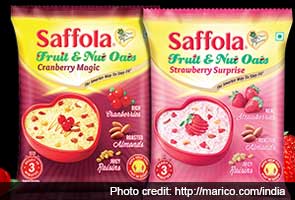 Marico shares surged as much as 4.5 per cent on Monday after the maker of Parachute coconut oil and Saffola edible oil reported a 24 per cent jump in profit.

Marico posted a net profit of Rs 198 crore on sales of Rs 1,555 crore in the December quarter, led by a solid 10 per cent jump in volumes.

Marico managed to surprise analysts in a quarter in which HUL - India's biggest FMCG company - reported a 6 per cent growth in volumes.

Marico's domestic FMCG business, which contributed 78 per cent to its revenues in Q3, reported 7 per cent growth whereas its international business registered a growth of 9 per cent.

Deflationary environment in commodity prices boosted profitability, with EBITDA or operating margin expanding 633 basis points to 18.9 per cent in Q3.

Marico shares closed 1.96 per cent higher at Rs 226 apiece compared to 0.18 per cent fall in the broader Sensex.