Manufacturing Sector Growth Slows In May Amid Rising Inflation: Survey

A slower expansion in output and local demand pushed the Nikkei Manufacturing Purchasing Managers' Index down to 51.2 in May from April's 51.6. 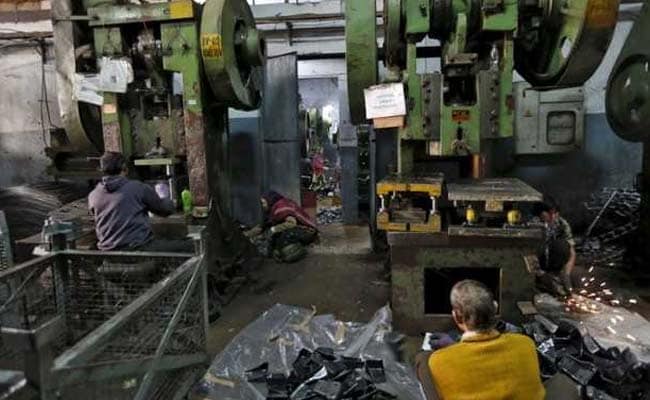 This is another sign that an interest rate hike by RBI is around the corner.

BENGALURU: Activity in the manufacturing sector grew at a weaker pace in May from the previous month, a business survey showed on Friday, while inflationary pressures picked up again amid rising oil prices in another sign that an interest rate hike is around the corner. A slower expansion in output and domestic demand helped push the Nikkei Manufacturing Purchasing Managers' Index, compiled by IHS Markit, down to 51.2 in May from April's 51.6. It also lagged a Reuters poll median of 51.5. But it remained above the 50-mark that separates growth from contraction for the tenth month in a row.

More significantly, the survey yet again showed a build-up of inflationary pressures that would no doubt be watched closely by policymakers.

It backs a Reuters poll of economists that forecast the Reserve Bank of India (RBI) to hike rates in August, a dramatic turnaround from just a month ago when a survey predicted an increase only in the second half of 2019.

"A build-up of inflationary pressures re-emerged with input cost and output charge inflation at the strongest since February, due to the upswing in global oil prices," Aashna Dodhia, an economist at IHS Markit, said in a release.

A surge in oil prices over the past few months means retail inflation has remained above the RBI's target of 4 per cent for six months, increasing pressure on the central bank to act sooner than previously expected.

"In efforts to contain inflation and maintain financial stability, it is likely that the RBI will raise interest rates over the summer," said Dodhia.

Friday's survey also showed foreign demand for manufactured goods rose at the strongest pace in three months, though the same cannot be inferred about domestic demand.

A sub-index tracking overall demand declined to 51.6 last month from 52.0 in April, suggesting domestic demand may still be recovering from the botched implementation of a new national tax system last year.

So overall output expanded at a slower pace, leading firms to hire only modestly, and optimism about future output declined after hitting a nine-month high in April.

GDP grew at its fastest annual pace in nearly two years during the January-March quarter, expanding a better-than-expected 7.7 per cent, and retaining its title as the fastest growing major economy by beating China's growth rate of 6.8 per cent.
© Thomson Reuters 2018

(Except for the headline, this story has not been edited by NDTV staff and is published from a syndicated feed.)
Comments
Nikkei Manufacturing Purchasing Managers' IndexPMI