LPG Price: Government subsidises a total 12 cylinders (14.2 KG) per household per year. Additional purchases have to be made at market rates.

Non-subsidised LPG (liquefied petroleum gas) or cooking gas prices were increased with effect from January 1, 2020. That marked a fifth straight monthly hike in the prices. In Delhi and Mumbai, the hike was to the tune of Rs 19 and Rs 19.5 per cylinder respectively, according to Indian Oil Corporation, which supplies LPG under the Indane brand. With effect from January 1, the non-subsidised LPG rates were revised to Rs 714 per cylinder in Delhi and Rs 684.50 per cylinder in Mumbai. In December, the prices had stood at Rs 695 per cylinder and Rs 665 per cylinder respectively, according to Indian Oil's website - iocl.com. 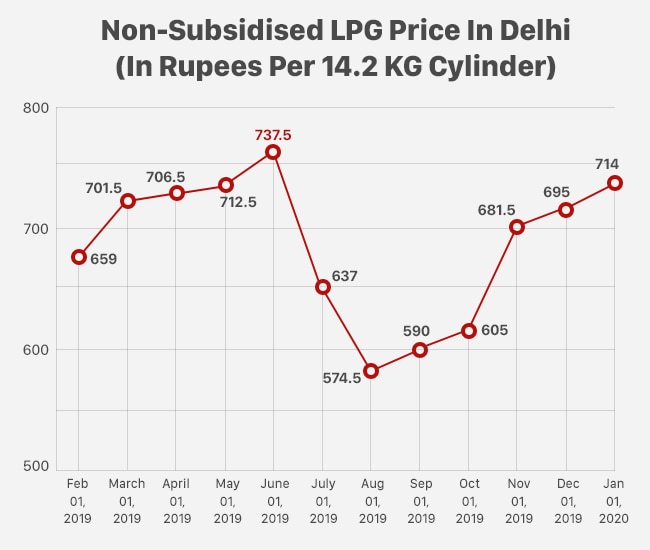 LPG Price In Metros With Effect From January 1, 2020

From December 1, the prices of 19-kilogram cylinders were also revised upwards to Rs 1,241 per unit in Delhi and Rs 1,190 in Mumbai, according to Indian Oil.

Currently, the government subsidises 12 cylinders of 14.2 kilograms each per household in a year. The consumer has to make any additional purchases at the market price. The amount of subsidy provided by the government on the quota of 12 cylinders per year varies from month to month.

Factors such as changes in the average international benchmark LPG prices and foreign exchange rates determine the subsidy amount.