LPG Price Today: Indian Oil consumers in Delhi and Mumbai now have to shell out Rs 581.50 and Rs 579 respectively for each refill of non-subsidised LPG.

LPG Cylinder Price: Non-subsidised LPG or liquefied petroleum gas prices were reduced by up to Rs 192 per cylinder in metros on Friday. That marked a third consecutive monthly cut in the cooking gas rates. With effect from May 1, the price of non-subsidised LPG was reduced by Rs 162.50 per cylinder (14.2 kilograms) in Delhi and Rs 135.50 per cylinder in Mumbai, data from Indian Oil Corporation showed. Indian Oil - the country's largest fuel retailer - supplies LPG under brand Indane.

Here are the latest rates of Indane non-subsidised LPG in the four metros:

With effect from May 1, Indian Oil consumers in Delhi and Mumbai have to shell out Rs 581.50 and Rs 579 respectively for each refill of non-subsidised LPG - or cooking gas. Until now, they were paying Rs 744 and Rs 714.50 per cylinder respectively.

Taking into account the downward revisions in March and April, the price of non-subsidised cooking gas in Delhi has been lowered by a cumulative Rs 277 per cylinder so far. Prior to the current cycle of cuts, the prices were raised in the previous six months. 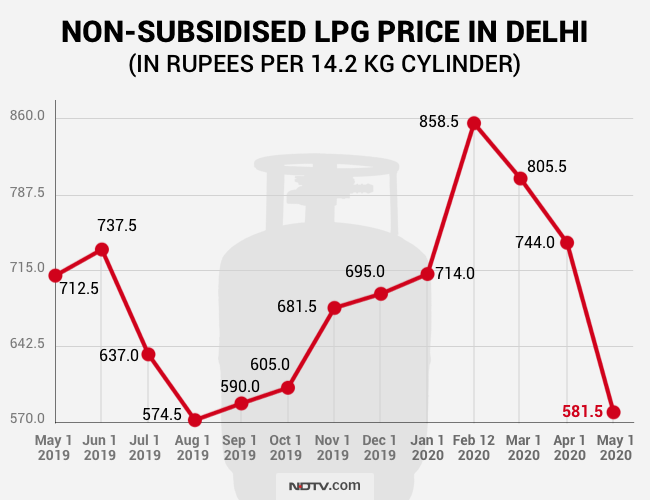 (With three cuts in a row, LPG prices erased all hikes in the past six months)

The amount of subsidy - provided by the government on the annual quota of 12 refills - varies from month to month and is determined broadly by factors such as crude oil rates and foreign exchange.