Gains in HDFC, Larsen & Toubro, ITC and HCL Technologies were offset by losses in Infosys, ICICI Bank and Axis Bank.

The S&P BSE Sensex and NSE Nifty 50 indexes ended lower on Thursday led by declines in banking and IT heavyweights like Infosys, State Bank of India, HDFC Bank and IndusInd Bank. However, losses were capped as Reliance Industries, Bharti Airtel and HCL Technologies saw buying interest. For most part of the day, the benchmarks traded in rangebound fashion and switched directions at least eight times before closing with minor losses. The Sensex moved in a range of 486 points while the Nifty touched high of 11,680 and low of 11,535. Assembly election results from Haryana and Maharashtra showed that Bharatiya Janata Party retaining power in Maharashtra while Haryana was seen going for a hung house where Dushyant Chautala's JJP could emerge as a possible kingmaker.

Here are the highlights of today's moves in stock markets:

Oct 24, 2019 15:07 (IST)
Nifty Bank 31,000 Call Most Active In F&O Segment Ahead Of Weekly Expiry
Nifty Bank's 31,000 call option contract was among the most active option contracts on the NSE.
Premium on the contract fell 97 per cent to 10 paise. 51,760 shares were added to the open interest which stood at 3,01,060 shares.
Oct 24, 2019 14:02 (IST)
Sensex Falls Over 200 Points, Nifty Drops Below 11,550 As Banking Stocks Sag
The Sensex shed as much as 218.07 points to slide below the 38,850 mark and the Nifty slipped below 11,550 as the selloff in banking stocks deepened. The Sensex and Nifty touched 38,840.76 and 11,534.65 respectively at the lowest levels in afternoon.
The Nifty Bank - comprising shares of 12 major lenders in teh country - fell as much as 1.58 per cent.
Oct 24, 2019 13:49 (IST)
Telecom Operators Fall After Supreme Court Rejects Their Appeal
Shares of telecom companies fell after the Supreme Court rejected telecom companies' appeal against government's definition of adjusted gross revenue (AGR).
Telecom companies will have to take a hit of Rs 92,000 crore after the Supreme Court allowed centre to recover adjusted gross revenue.
Oct 24, 2019 12:46 (IST)
Rupee Rises 21 Paise To 70.70 Against Dollar
The Indian rupee appreciated by 21 paise to 70.70 against the US dollar in early trade on Thursday as easing crude prices strengthened investor sentiments.
Trading in emerging market currencies was subdued after British Prime Minister Boris Johnson lost the crucial Brexit Bill timetable vote.
Besides, markets are also awaiting fresh cues on the potential US-China trade deal, they added.
Oct 24, 2019 12:25 (IST)
Mid- And Small-Caps Witness Mild Buying Interest
Mid- and small-cap shares were witnessing a mild buying interest and were mostly in line with their larger peers. The Nifty Midcap 100 and Nifty Smallcap 100 indexes rose a little over 0.1 per cent. 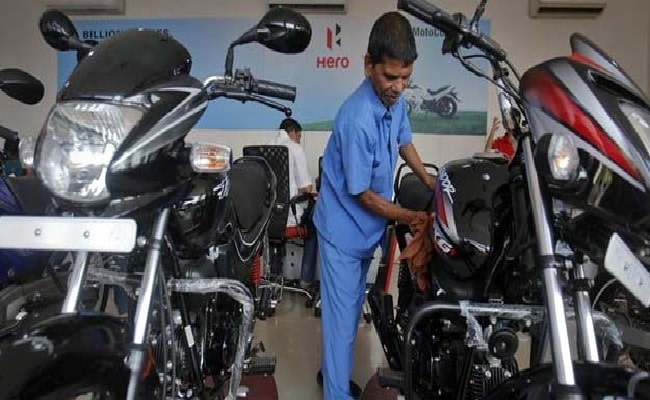 its revenue declined 17 per cent to Rs 7,571 crore during the quarter.
Oct 24, 2019 11:15 (IST)
MTNL Locked In Upper Circuit After Government Approves Merger With BSNL
Shares of Mahanagar Telephone Nigam Limited (MTNL) rose by their daily maximum limit of 5 per cent to hit an intraday high of Rs 6.19 after the government on Wednesday approved its merger with Bharat Sanchar Nigam Limited (BSNL).
"The government is neither closing nor divesting stake in MTNL and BSNL," Union Minister Ravi Shankar Prasad said in a press briefing on Wednesday. The move comes at a time public sector companies MTNL and BSNL are facing financial stress amid intense competition in the telecom sector.
To make the proposed joint venture more competitive and professional, the government would raise Rs. 15,000 crore via sovereign bonds, which will be serviced by MTNL and BSNL, Mr Prasad said.
The turnaround plan includes monetisation of assets worth Rs. 38,000 crore owned by the two companies over a period of four years. The move is expected to help the companies raise resources for retiring debt, servicing of bonds, network upgradation and expansion, and for meeting operational fund requirements, the statement said.
Oct 24, 2019 10:43 (IST)
Nifty PSU Bank Index Worst On NSE, Falls Over 1%
Six of 11 sector gauges compiled by National Stock Exchange were trading lower led by the Nifty PSU Bank index's over 1 per cent gain. Nifty Private Bank, Nifty Bank, Nifty Auto and Nifty Pharma indexes were also trading with a negative bias.
On the flipside, Nifty Media index was top gainer, up 0.8 per cent.
Oct 24, 2019 10:29 (IST)
Big Lead For BJP-Shiv Sena In Maharashtra; BJP Ahead In Tense Haryana Fight
In Maharashtra, the BJP and its ally Shiv Sena are ahead in 166 of 288 assembly seats. The Congress and its ally Nationalist Congress Party (NCP) are ahead in 87 seats. The majority mark is at 145. 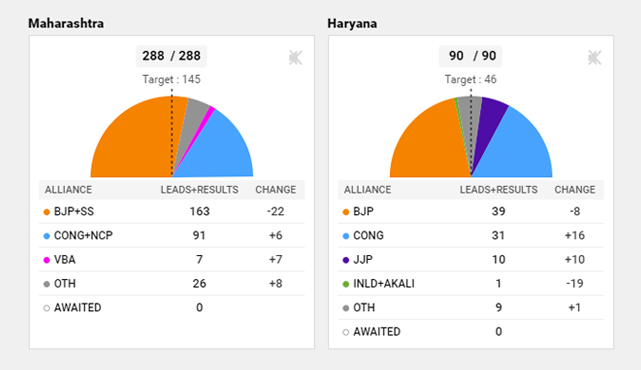 In Haryana, the BJP is ahead in 44 of 90 seats and the Congress is leading in 25. The majority mark is 46. A BJP victory means a rerun for Manohar Lal Khattar, despite a mixed track record in the past five years.
Oct 24, 2019 10:23 (IST)
Overall Market Breadth Remains Positive
The overall market breadth was positive as 985 shares were advancing while 632 were declining on the NSE.
On the BSE, 987 shares were advancing while 691 were declining.
Oct 24, 2019 09:34 (IST)
Infosys Declines After US SEC Investigates Infosys On whistleblower Complaints
Infosys shares fell as much as 0.78 per cent to Rs 645.70 after the US Securities and Exchange Commission (SEC) launched an investigation into whistleblower claims that thesoftware services firm used 'unethical practices' to boost revenue and profit, the company said in an exchange filing.
The company said Securities and Exchange Board of India (SEBI), had also requested additional information from the company concerning the complaints.
Oct 24, 2019 09:30 (IST)
HCL Technologies Rises Over 5% After September Quarter Earnings
Shares of the Noida-based software services company - HCL Technologies - rose as much as 5.83 per cent to hit an intraday high of Rs 1,159 after it reported September quarter earnings after market hours on Wednesday.
HCL Technologies  on Wednesday reported a Rs. 2,651 crore consolidated net profit for the second quarter (Q2) of fiscal 2019-20, registering a 4.4 per cent annual growth over the same period a year ago.