Sensex and Nifty fell after government proposed increasing the minimum public shareholding in listed companies to 35 per cent from 25 per cent.

The S&P BSE Sensex and NSE Nifty 50 Indexes plunged as Budget proposals failed to cheer investor sentiment. The Sensex fell 395 points to settle at 39,513 and the NSE Nifty 50 Index dropped 136 points to close at 11,811. Analysts pointed at proposal to raise minimum public shareholding and no relief for large companies on corporate tax front in the Budget 2019 as some of the reasons for selloff in the equity markets today. The Selling pressure in today's session was broad-based as seventeen of 19 sector gauges compiled by BSE ended lower and the mid- and small-cap shares also faced the heat of selling pressure. Finance Minister Nirmala Sitharaman proposed increasing the minimum public shareholding in listed companies to 35 per cent from 25 per cent, threatening a wave of new issuance.

Here are the highlights of today's session of Sensex and Nifty: 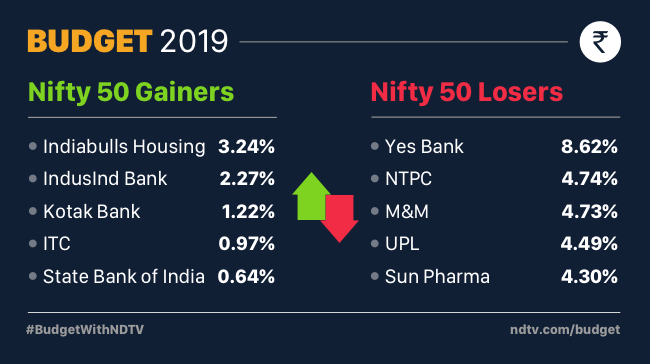 Jul 05, 2019 15:47 (IST)
"The major dampener in the Budget is compulsory selling of holdings in the companies to raise minimum public shareholding in listed companies to 35 per cent from 25 per cent. Considering BSE 500 Index it would lead to divestment of government holding worth Rs 3.7 lakh crore and for entire BSE this will amount to Rs 3.9 lakh crore of divestment," Deven Choksey of KR Choksey Securities told NDTV.
"Government intention is right but execution will have its own effect and overhang on the markets," Mr Choksey added.
Jul 05, 2019 14:13 (IST)
Cigarette Makers Swing After Government Proposes Nominal Basic Excise Duty
Shares of cigarette maker swung between gains and losses after the Finance Minister proposed for imposition of nominal basic excise duty on tobacco products.
Jul 05, 2019 13:35 (IST)
Markets Extend Losses; Sensex Slumps Over 500 Points From Day's High
Sensex plunges as much as 591 points from day's high and the Nifty 50 Index drops below 11,800 after Union Budget 2019.
As of 1:34 pm, the Sensex traded 442 points lower at 39,494 and the NSE Nifty 50 Index dropped 140 points to 11,807. 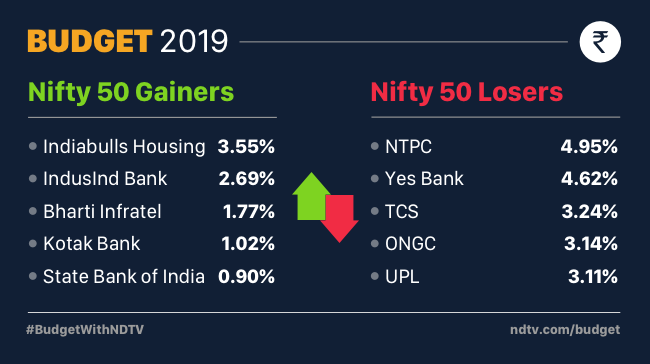 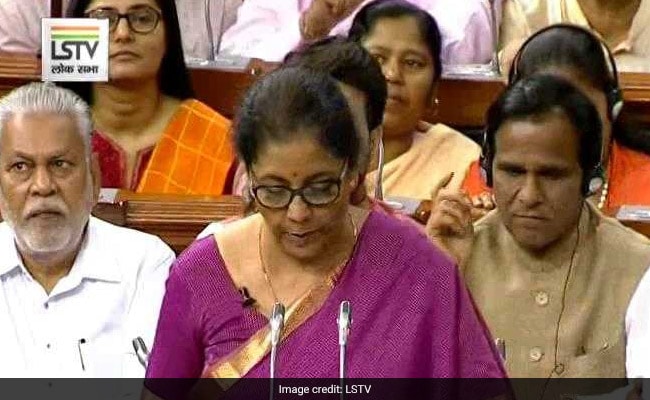 Jul 05, 2019 11:07 (IST)
Can Achieve Target Of  $5 Trillion Economy: Nirmala Sitharaman
Indian economy has reached $2.75 trillion in last five years and we are capable of becoming $5 trillion economy in couple of years, Finance Minister Nirmala Sitharaman said while presenting the Budget speech.
Jul 05, 2019 10:58 (IST)
Bond Yield Spikes, Rupee Falls Ahead Of Budget 2019
The 10-year benchmark government bond yield was at 6.8914 per cent, compared to its last close of 6.8891 per cent.
The rupee weakened to 68.6075 from its 68.52 close on Thursday.
Jul 05, 2019 10:55 (IST)
Budget Speech To Begin Shortly: Sensex, Nifty Trade On A Flat Note
The Sensex and Nifty were trading on a flat note ahead of the Budget speech as market participants await government's announcements.
As of 10:54 am, the Sensex was up 18 points at 39,386 and the NSE Nifty 50 Index was down 3 points at 11,943.
Jul 05, 2019 10:41 (IST)
Budget 2019 To Focus Farm Land Reforms, Says Deven Choksey
"Government is likely to invite capital inflows through measures like tax adjusted bonds for corporate, stressed asset funds for funding telecom, real estate, textile and infrastructure companies," Deven Choksey of KR Choksey Securities told NDTV.
"Focus will be on water infrastructure, agriculture and farm land reforms, sale of public sector undertakings and consolidations of public-sector banks.  Overall, this budget will be high on growth acceleration," Mr Choksey added.
Jul 05, 2019 10:28 (IST)
Bahi Khata, Not Briefcase. Nirmala Sitharaman Ends British-Era Tradition
Finance Minister Nirmala Sitharaman did not pose with the iconic briefcase, like her predecessors. In a departure from tradition, she was seen holding a red cloth folder enclosed with a string and emblazoned with the national emblem, which was described by officials as the "bahi khata".
Chief Economic Advisor Krishnamurthy Subramanian said the Budget briefcase had been replaced by the traditional bahikhata in keeping with Indian tradition.
"It is in Indian tradition. It symbolizes our departure from slavery of western thought. It is not a budget but a 'bahi khata'(ledger)," Mr Subramanian was quoted as telling news agency ANI. 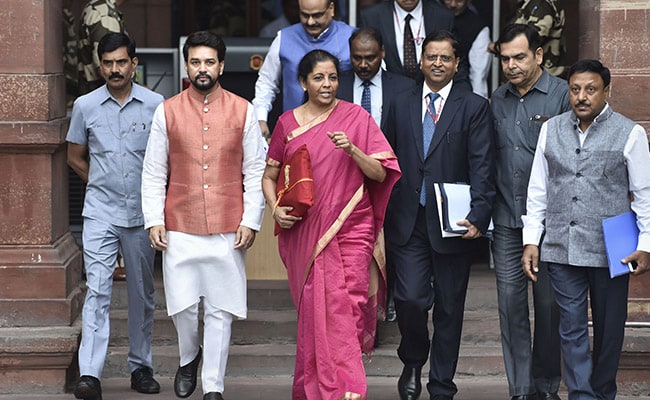 Jul 05, 2019 10:19 (IST)
Need A Reasonable Tax Regime For Corporates, Say Market Experts
"We need to have a reasonable tax regime for corporates as multiple taxes deter investors to invest in India and a roadmap towards that will be watched out in the Budget 2019," AK Prabhakar, head of research at IDBI Capital Market, told NDTV in a telephonic conversation.
"There are multiple times the companies are taxed for example dividend paying companies after paying corporate tax they have to pay dividend distribution tax and the end user who gets dividend more than Rs. 10 lakh has to pay another 10 per cent as tax to the government and as a result many companies are not paying dividends rather they are going for share buybacks," he added.
Jul 05, 2019 10:15 (IST)
Market Update: Sensex and Nifty came off intraday highs and were trading flat ahead of Budget speech which is due to begin at 11:00 am. Gains in HDFC, Larsen & Toubro, HDFC Bank, Kotak Mahindra Bank, Reliance Industries and State Bank of India were offset by losses in ONGC, ITC, Yes Bank, NTPC and Vedanta.
At 10:14 am, the Sensex was up 0.13 per cent or 51 points at 39,959 and the NSE Nifty 50 Index advanced 0.08 per cent or 10 points to 11,956.
Jul 05, 2019 10:11 (IST)
Budget 2019: No Briefcase. Nirmala Sitharaman Makes Statement With Budget Bahi Khata
Finance Minister Nirmala Sitharaman did not pose with the iconic briefcase, like her predecessors. In a departure from tradition, she was seen holding a red cloth folder enclosed with a string and emblazoned with the national emblem, which was described by officials as the "bahi khata". Chief Economic Advisor Krishnamurthy Subramanian said the Budget briefcase had been replaced by the traditional "bahi khata" in keeping with Indian tradition. "It is in Indian tradition. It symbolizes our departure from slavery of western thought. It is not a budget but a 'bahi khata'(ledger)," Mr Subramanian was quoted as telling news agency ANI. 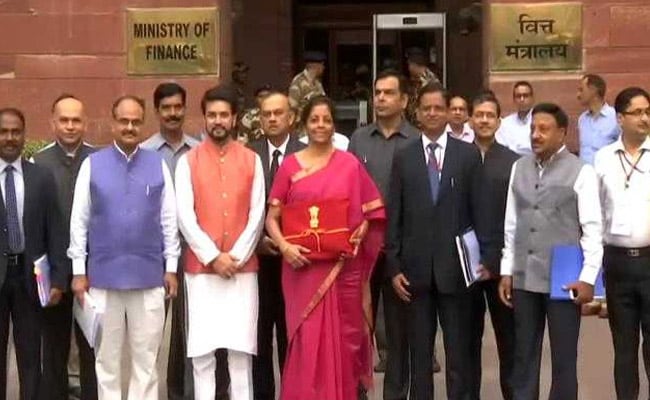 Jul 05, 2019 09:53 (IST)
GMR Infra Surges 5% On Rs 8,000 Crore Airport Deal
GMR Infrastructure shares surged as much as 5 per cent to Rs 15.90 after the company informed exchanges that it has executed share subscription and purchase agreement with TRIL Urban Transport Private Limited (part of Tata Group), an affiliate of GIC and SSG Capital Management for a proposed investment of Rs 8,000 Crores in GMR Airports Limited, a subsidiary of the company.
Jul 05, 2019 09:36 (IST)
Mid- and small-cap shares were witnessing a mild buying interest as the the S&P BSE MidCap Index and S&P BSE SmallCap Index rose 0.14 and 0.18 per cent each respectively.
GMR Infra, Godrej Agro Products, Ramco Cements, Oberoi Realty, LIC Housing Finance, L&T Housing Finance and Central Bank of India were among the gainers from the mid-cap space.
Jul 05, 2019 09:30 (IST)
Fifteen of 19 sector gauges compiled by BSE were trading higher led by the S&P BSE Realty Index's 0.7 per cent gain. Capital Goods, Industrials, Finance and Teleco sector gauges also rose between 0.3 and 0.6 per cent respectively.
On the other hand, S&P BSE Metal Index was top loser, down 0.3 per cent.
Jul 05, 2019 09:22 (IST)
The S&P BSE Sensex and NSE Nifty 50 Indexes moved higher led by gains in HDFC Bank, HDFC, Reliance Industries, Larsen & Toubro, Hindustan Unilever and Kotak Mahindra Bank ahead of Union Budget for financial year 2019-20 due later in the day.
The Sensex rose as much as 124 points to touch intraday high of 40,031.81 and the NSE Nifty 50 Index advanced 35 points to 11,982. 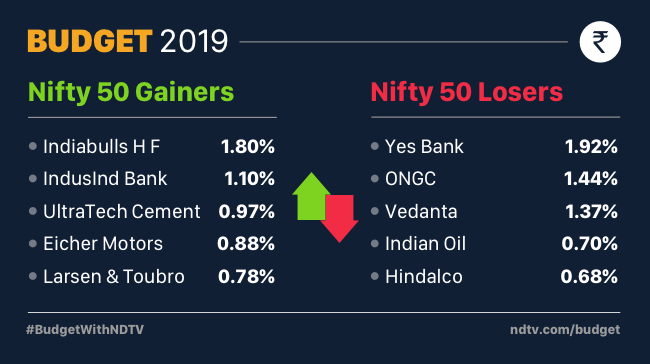 Jul 05, 2019 09:07 (IST)
"Market participants are expecting tax cuts in the Budget as there are no chances of tax increases this time around," AK Prabhakar, head of research at IDBI Capital told NDTV.
"Any cuts on the corporate tax front or dividend distribution tax front will be taken positively in the markets. However, high volatility is expected in markets today and Nifty is likely to touch a record high of 12,100 and on the downside support on the downside is at 11,750," Mr Prabhakar said.
Jul 05, 2019 08:53 (IST)
"Nifty is likely to touch record high in today's session and Nifty can up to 12,100 as government is likely to announce reforms for agriculture and infrastructure sectors," Sumeet Bagadia, associate director at Choice Broking told NDTV over phone.
"On the downside support for Nifty is at 11,800, however, wild swings are expected in the benchmarks today," Mr Bagadia added.
Jul 05, 2019 08:46 (IST)
Nifty ended above 11,900 for the third consecutive day but formed a pattern similar to shooting star on charts indicating exhaustion or reversal of trend in days to come, Nadeem Mustafa, CEO, Epic Research said.
"12,000 - 12,050 levels on the Nifty are very important as we are continuously seeing selling pressure around that zone and Nifty failing to breach it. With Budget coming up, we believe there are chances of some decisive move. One should remain cautious and have a conservative approach to the market rather than being aggressive or carrying a naked position," Mr Mustafa added.
Jul 05, 2019 08:42 (IST)
Nifty futures on Singapore Exchange also known as the SGX Nifty rose 10 points to 11,990 indicating a flat start for Indian equity markets ahead of Union Budget 2019.

From Zero To Unicorn, What Start-Ups Expect From Union Budget 2022