The Reserve Bank of India, which orchestrated the rescue, "has advised the need to fully write down" the Tier-2 debt, Lakshmi Vilas Bank said in an exchange filing Thursday. 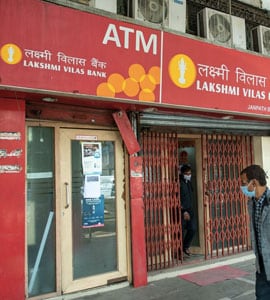 A struggling Indian bank being acquired by DBS Group Holdings will write off Rs 318 crore ($43 million) of bonds before being purchased by the Singaporean group. The Reserve Bank of India, which orchestrated the rescue, "has advised the need to fully write down" the tier-2 debt, Lakshmi Vilas Bank said in an exchange filing Thursday. The planned takeover triggered the move, it said.

While Lakshmi Vilas' stocks and debentures were to be delisted as part of the deal, the administrator appointed by the Reserve Bank after it seized the lender had said last week that DBS would take over all obligations including bonds and no jobs would be cut.

"To my knowledge this is the first time in at least 20 years that tier-2 bonds have been written down," said Shameek Ray, head of debt capital markets at ICICI Securities Primary Dealership. "It is a good step by the RBI as it underlines the sanctity of the point of non-viability. No investor can take their capital holding in a weak private bank for granted."

The deal is the first time Indian authorities have turned to a foreign lender to bail out a local rival, as they try to shore up a financial industry that has suffered a series of shocks. Trading in Lakshmi Vilas's shares were suspended on Thursday, athough depositors will be protected.