Two months after India's oldest private-sector airline grounded its last plane, and with even a water-bottling firm threatening to drag the carrier into bankruptcy, a consortium of lenders led by State Bank of India can finally stop pretending that a white knight is coming.

With the insolvency tribunal taking Jet Airways India Ltd. under its wing on Thursday, there may be one more abortive attempt to sell it whole. But now that lessors have taken most of the fleet, employees have all but given up on back wages, and the country's aviation market has moved on, liquidation is the most practical solution. Little will be recovered from financial and operational creditors' claims, which may add up to more than Rs 14,000 crore ($2 billion), according to local media reports. Jet, as Monty Python might have observed, isn't exactly a Norwegian blue, pining for the fjords. It's a dead parrot. Banks killed it with kindness.

If only they had seen that founder Naresh Goyal wasn't able to cover costs, and was using borrowed money to keep the full-service airline afloat amid intense competition with low-cost rivals. One refusal from them to lend more without fresh equity from 51% owner Goyal, his 24% partner Etihad Airways PJSC, or the public, would have hastened the default that finally occurred in January. Even then, creditors could have produced a new controlling shareholder in an out-of-court process if they'd wrested control of the board from Goyal rather than waiting until late March. The airline could still have survived even if that had failed, with banks supplying working capital through an in-court bankruptcy process. A new owner wouldn't have made creditors whole, but any offer would have been better than the chump change they will get from liquidation of a grounded carrier. So why didn't SBI and other creditors act earlier?

They probably never believed Goyal, a survivor of several tight corners in the last 25 years, was going to crash land this time. After they did wake up to that possibility, they still dithered. Banks are already swamped by $200 billion-plus of soured corporate debt. Every exposure taken to the bankruptcy tribunal means more money to be set aside from profit, which has been in short supply at Indian lenders lately.

Also, the 2016 law has already been so badly abused by owners trying to stall the sale of prized assets that banks are starting to treat in-court insolvency more like a mortuary than a hospital. However, if only basket cases come to the tribunal, or lenders start using the process as a cover for deals with people hiding from the law, they won't have a tool left to deal with the next downturn in the credit cycle.

Prime Minister Narendra Modi can count the insolvency regime as among the more significant achievements of his first term, before the draconian cash ban of November 2016 derailed the economy. His government even empowered the central bank to resolve some of the most egregious cases of bad debt. 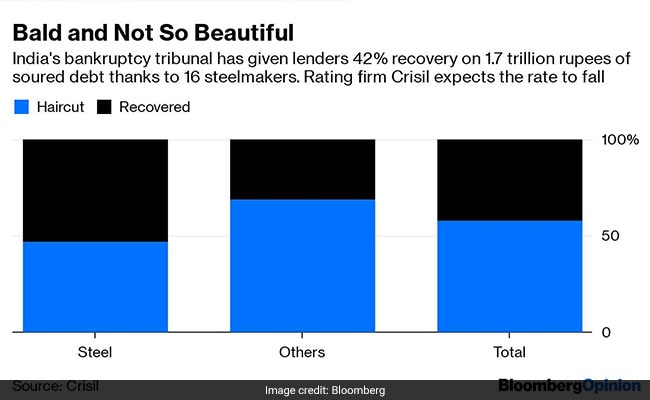 That reform momentum has faded, though. When the Reserve Bank of India, on its own initiative, tried to get more soured loans more speedily into in-court insolvency, the judiciary said it was acting beyond its powers. Modi's second five-year term has just begun. He would send an encouraging signal to global investors by once again pushing taxpayer-funded banks to use the bankruptcy law, and well before errant borrowers start pushing up the daisies.

As the bungling of Jet Airways shows, no insolvency law will do any good to a financial system that has too much respect for capitalists and too little for capitalism.