Reliance Industries-backed Viacom18 said its platforms have become one of the largest sporting destinations in India after IPL digital rights. 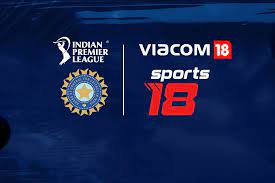 Reliance Industries-backed Viacom18 on Wednesday said its platforms have become one of the largest sporting destinations in India following the acquisition of digital rights of IPL for the seasons from 2023 to 2027.

The cricked board had fetched a whopping Rs 48,390 crore (USD 6.20 billion) through IPL media rights for five years, starting in 2023.

"After bagging a slew of sporting rights in soccer (FIFA World Cup, La Liga, Serie A and Ligue1), badminton, tennis and basketball (NBA), this is the first major foray of Viacom18 into cricket," the company said in a statement.

It further said, "The IPL rights make Viacom18 and its platforms one of the largest sporting destinations in the country."

Reliance Industries Ltd Director Nita Ambani said, "Cricket and IPL personify the best of sport and the best of India, which is why we are proud to be deepening our association with this great game and this wonderful league."

She further said, "Just like with everything we do, our mission is to take the joyful experience of IPL to cricket fans wherever they are - in every part of our country and around the world."

With these IPL rights, Viacom18 said it would be able to take India's biggest sporting event to every nook and corner of the country.

The statement said it will make IPL available to every Indian in every part of India, including the 60 million FreeDish homes that today are not able to access this popular content.

Viacom18 is a strategic collaboration between TV18 and Paramount Global. It has entered into a strategic partnership transaction with Bodhi Tree Systems (a platform of Lupa Systems of James Murdoch and Uday Shankar, ex-Chairman and CEO of Star India and the former President of Walt Disney Asia Pacific).

Viacom18 said it has demonstrated that it is building the digital platforms of the future while continuing to strengthen traditional television broadcasting.

The company added that it has state-of-the-art digital expertise to provide the best possible user experience to hundreds of millions of Indian and global consumers.

Winning the IPL digital rights "will be an exceptional opportunity for advertisers to reach a larger, younger, more relevant and highly-engaged audience", adding, "the targeting opportunities because of Viacom18's strategic partnership with Jio will be unparalleled."