IndiGo is offering low fares under a promotional sale which will remain open till May 20. 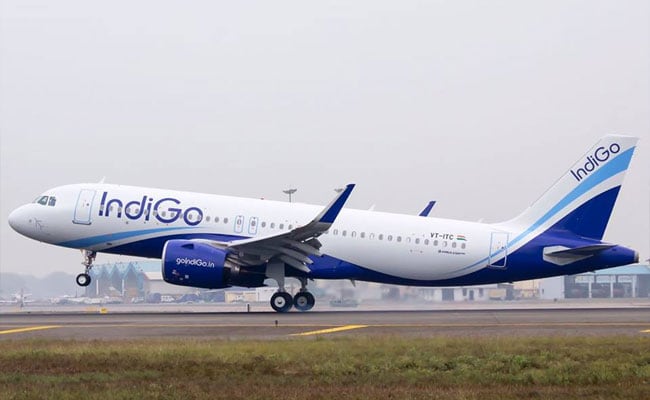 Bookings under the IndiGo scheme can be done for travel between June 5 and September 30.

Budget carrier IndiGo is selling tickets at discounted fares starting Rs 849 on select domestic routes. Indigo's 849 offer is valid on the Srinagar-Jammu route only. Also, IndiGo is offering another low fare of Rs 851 on the Bagdogra-Guwahati route under a promotional sale which will remain open till May 20. Bookings under the scheme can be done for travel between June 5 and September 30. Among other routes covered under the discounted fares scheme include Chennai-Bengaluru (Rs 1,119) and Delhi-Jaipur (Rs 1,189). The IndiGo offer is applicable on bookings made at least 20 days prior to travel dates mentioned in the promotional period across all booking channels.

A search on IndiGo's website showed the tickets priced at Rs 849 available for travel in the last week of August: 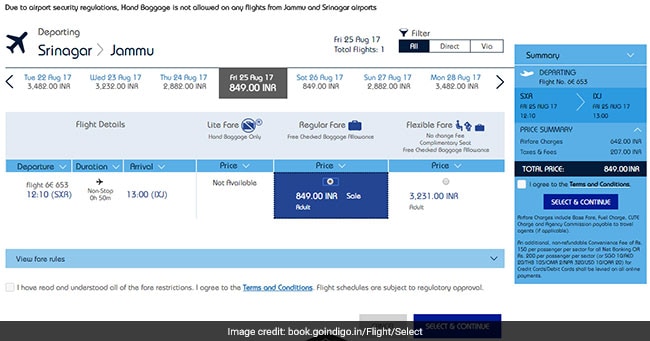 Also, the Rs 851 tickets were available in mid-August: 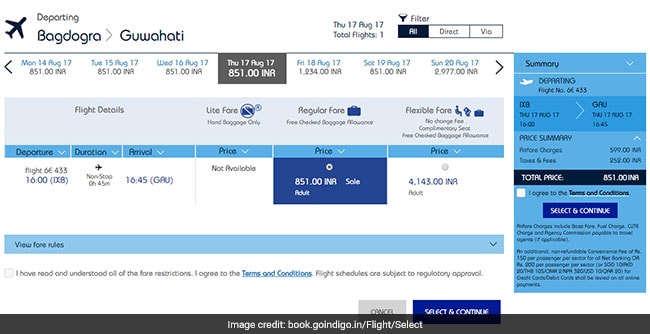 The search on the IndiGo bookings portal also showed the Rs 1,119 fare on Chennai-Bengaluru route in mid-August:

For the Delhi-Jaipur route, the Rs 1,189 fares are available from the first week of August:

Domestic air traffic witnessed a marginal growth with demand for travel going up by a little over 15 per cent in April over the year-ago period.

Indian carriers together flew 91.34 lakh passengers in April 2017 as against 79.32 lakh passengers in the corresponding month of the previous year, as per monthly traffic data released by the Directorate General of Civil Aviation (DGCA).

Promoted
Listen to the latest songs, only on JioSaavn.com
IndiGo flew the maximum number of passengers at 37.79 lakh garnering 41.4 per cent of the total market share.