Soaring prices and the subsequent hit to consumer spending and investments are likely to further dampen India's economy, as the central bank faces a finely balanced struggle to tame inflation via rate hikes without hurting economic growth, economists said. 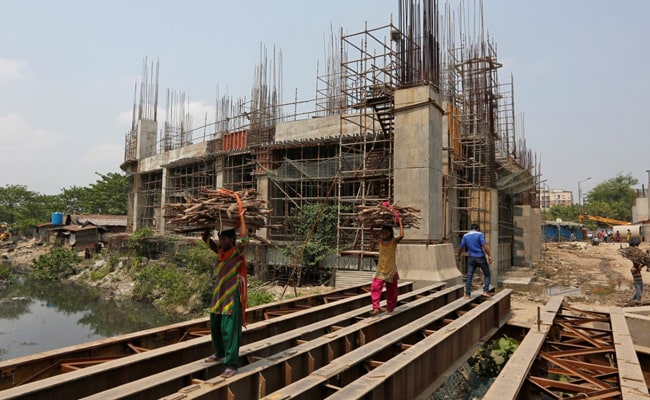 Economists have revised down India's growth forecast for 2022.

Soaring prices and the subsequent hit to consumer spending and investments are likely to further dampen India's economy, as the central bank faces a finely balanced struggle to tame inflation via rate hikes without hurting economic growth, economists said.

Asia's third-largest economy probably grew 4.0% in the January-March quarter from a year earlier, a Reuters poll showed last week. That would be the slowest pace in a year, following 5.4% growth in the previous quarter.

The economy's near-term prospects have been darkened by a spike in retail inflation, which hit an eight-year high of 7.8% in April. The surge in energy and commodity prices following the Ukraine crisis is also exerting a drag on economic activity.

The Reserve Bank of India (RBI) raised the benchmark repo rate by 40 basis points in an unscheduled meeting early this month.

The latest Reuters poll shows over a quarter of economists, 14 of 53, expect the RBI to hike by 35 basis points to 4.75% in June, while 20 expect a larger move ranging from 40-75 basis points, including 10 who forecast a 50-basis-point hike.

Economists have revised down India's growth forecast for 2022 as rising energy and food prices have hit consumer spending - which accounts for 55% of the economy - while most companies increasingly pass on rising input costs to consumers.

"The rise in crude oil, food and fertiliser prices will weigh on household finances and spending in the months ahead," Moody's, the rating agency, said in a note. It has cut India's growth forecast to 8.8% from 9.1% for the 2022 calendar year.

The rupee's nearly 4% depreciation against the dollar this year has also made imported items costlier, prompting the federal government to restrict wheat and sugar exports and cut fuel taxes, joining the RBI in the battle against inflation.

High-frequency indicators showed supply shortages and higher input prices were weighing on output in the mining, construction and manufacturing sector, even as credit growth has picked up and states are spending more.

Indian consumer sentiment slid in early May, dipping for the second month in a row, as rising fuel prices and broader inflation hit household finances, according to a Refinitiv Ipsos Indian survey.

Unemployment rose to 7.83% in April from 7.57% in March, according to the Centre for Monitoring Indian Economy, a Mumbai-based private think tank.

RBI Governor Shaktikanta Das said last week that the central bank's primary focus was to bring inflation closer to its target but it could not disregard concerns around growth.