Out of 416 open-ended, onshore equity funds, 401 have lost money this year. Tech funds, the only ones to have performed decently, have been helped by Asia's worst-performing currency of 2018. And that's only because Indian software exporters earn revenues in a strong dollar and pay wages in rupees.

Most other mutual funds are down 20 percent to 40 percent in a flat market.

Individual investors started returning to collective investment vehicles after the 2014 general elections, hoping for a reset to an economy held back by corruption scandals and policy paralysis. They doubled down after Prime Minister Narendra Modi's shock November 2016 currency ban pulled 86 percent of people's cash into bank accounts.

But now disappointment is writ large.

Fund managers who'd hoped for private-equity type returns by discovering jewels buried in the haystacks of public markets were essentially souping up performance by forgoing liquidity. Now that the markets are punishing them for that recklessness, the search for the elusive alpha is over - in infrastructure; power; banking and finance; small-, mid- and micro-cap shares; transport and logistics; value stocks; state-owned firms; business cycles; and every other fad.

With fund asset values collapsing, what happens if investors get up and leave?

Even during last month's brutal sell-off, they poured 111 billion rupees ($1.5 billion) into stock funds, the most since May. However, "buy-on-dips" greed can't last if asset prices don't recover. 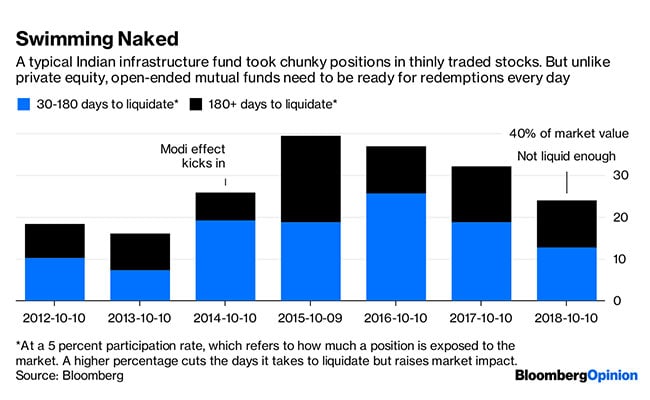 A rush for the exits may cause its own problems, especially when it comes to handling redemption pressures. On conservative estimates, it would take more than 30 days to offload a quarter of the net assets of one small Indian infrastructure fund, Bloomberg's liquidity tools show. A fifth of a large tax-saver fund would need more than 180 days to dismantle, so thin is the liquidity of the stocks it holds. (By contrast, a typical index fund tracking the Nifty 50 can be entirely liquidated in less than three days.) 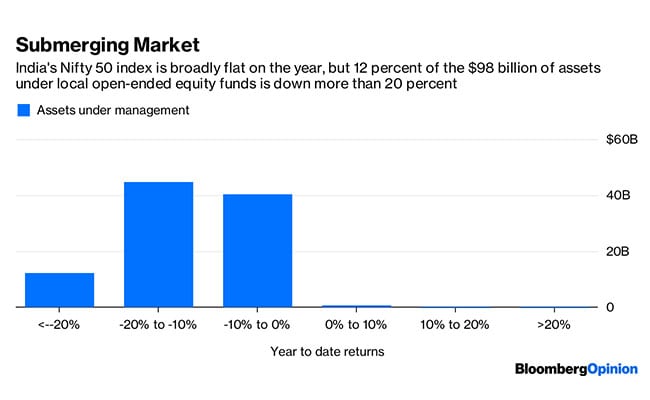 Concerns around liquidity have been elevated ever since IL&FS Group, a highly rated Mumbai-based infrastructure financier, started missing debt payments. The panic from this mini-Lehman moment spread last month to money-market mutual funds, which have been providing most of the credit to housing-finance companies and other non-bank lenders. Then it was the stock market's turn to focus on asset-liability mismatches by pummeling the likes of Dewan Housing Finance Corp.

Authorities have responded by taking over the management of IL&FS to shore up confidence. State Bank of India, the country's biggest lender, this week tripled its annual target for buying shadow banks' assets, including some of Dewan's home loans, according to the Economic Times. Considering less than $12 billion of Indian retail assets were securitized and sold last year, State Bank's $6 billion commitment could be a welcome source of liquidity to parched shadow lenders.

Will it be enough? State Bank might end up picking a decent pool of mortgage assets in the bargain, and so could some others like Bank of Baroda. Still, a liquidity crunch eases only when somebody makes a bold commitment to supply it in unlimited quantities.That role can only be played by the central bank. Worryingly, however, the cash that the Reserve Bank of India is plowing into the system is coming back as a temporary surplus - banks are scared to take credit risks. While the system-wide liquidity shortage of $20 billion or so as of Sept. 24 has eased, at the last count there's still a deficit of more than $5 billion. 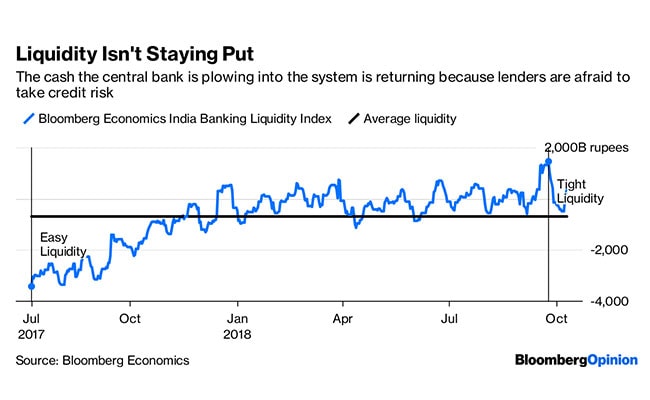 If all this panic can result from turbulence at money-market funds, which aren't even a mainstream retail product in India, imagine the peril if households give up on badly performing equity funds sitting on hard-to-liquidate portfolios. At present, about $12 billion out of $98 billion parked with open-ended stock funds is underwater by more than 20 percent.

Nobody knows just where the limit for investors' patience lies, but it can't be very far.

(Except for the headline, this story has not been edited by NDTV staff and is published from a syndicated feed.)
Comments
IL&FS

Flipkart Vs Amazon Sales Are Like India Vs Pak Cricket