Finance Minister Arun Jaitley raised the government's fiscal deficit target for 2017-18 to 3.5 per cent of the GDP. 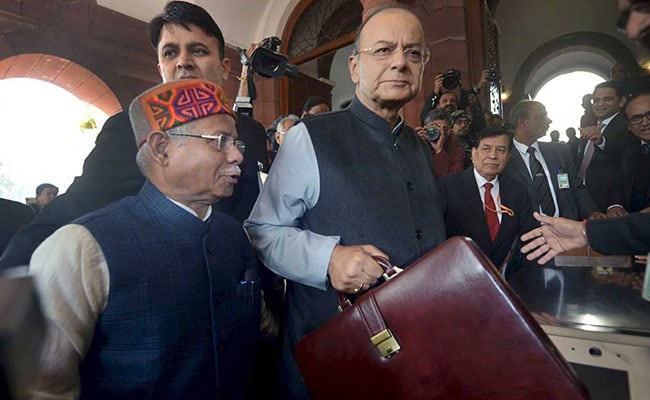 This slippage has no material impact on India's overall fiscal strength, Moody's said

Presenting his last full budget before the general elections early next year, Jaitley made a significant announcement of fiscal slippage with implications for pushing inflation, revising upwards the government's fiscal deficit target for 2017-18 to 3.5 per cent of the GDP, or the equivalent of Rs 5.95 lakh crore.

The higher target came in place of the 3.2 per cent -- or Rs 5.46 lakh crore -- for the current fiscal announced earlier.

"This slippage has no material impact on India's overall fiscal strength although some measures such as the rise in Minimum Support Prices (MSPs) and ambitious GST revenue targets could result in some further slippage," Moody's Investor Service said in a statement.

"Slight slippage in the budget deficit targets has no material impact on the country's overall fiscal strength and is in line with Moody's expectations."

In the budget, Jaitley announced that the MSP for notified kharif crops will be 1.5 times the input cost, and also stepped up total budgetary allocation for the sector for next fiscal by about 5 per cent.

He also said that a one month loss in revenue because of GST made up a substantial part of the shortfall, elaborating that the revenues for the coming March from the Goods and Services Tax (GST) implemented from last July would only be available in April after the end of the current fiscal.

"However, some ambitious revenue assumptions and uncertainty about some spending items could result in a shortfall to overall fiscal consolidation," he added.

The American financial services multinational also said the government's medium-term target to reduce its debt-to-GDP ratio to 40 per cent is supportive of India's sovereign credit profile.

The formal adoption of key recommendations by the Fiscal Responsibility and Budget Management Committee is "credit positive", according to Moody's.

These include the objective to bring down the central government debt-to-GDP ratio to 40 per cent, from the current level of 50 per cent, and use of the fiscal deficit target as the government's key operational parameter, it said.

The rating agency feels that the budget benefits corporates, including the infrastructure and insurance sectors.

"Budget is broadly positive for corporates. Higher rural spending, lower corporate taxes and relaxing restrictions on the ability of financial intermediaries to invest lower rated
corporate bonds are credit positive for most corporates," the statement said.

"Higher custom duties on some products will encourage domestic production over the longer term but may slow downnear-term growth for industries which depend on these imports," it added.

Infrastructure will benefit from a boost in spending, and the government's continued focus on public investment will also help galvanise capital spending, Moody's said.

Besides, the insurance market will benefit from the launch of a national health scheme and the merger, as well as listing of three state-owned insurers.

In this connection, rebutting criticism of Budget 2018-19 pandering to the farm sector in a pre-election year at the expense of the middle class and the corporate sector, Jaitley on Friday showed how his latest budget exercise is actually designed to boost overall economic growth with the help of all segments.

Interacting here with corporate leaders following his budget presentation, Jaitley said that a stressed agriculture sector was not in India's interest, indicating thereby that boosting rural demand is a key in helping the Indian industry currently burdened with massive leverage, while banks struggle with their accumulated bad loans.


(Except for the headline, this story has not been edited by NDTV staff and is published from a syndicated feed.)
Comments
Budget 2018Fiscal deficitBudget - expectations