India's Stock Market Sets Off Alarm Bells, But It Will Get Better: Experts

The India VIX Index has stayed above its three-year average this year, with a spike in cross-border tension only adding to the political uncertainty.

Two months ago, it was Asia's hottest stock market. Now, investors are shunning it.

India has wiped out $113 billion in value this year after winning the regional equity crown in 2018. Uncertainty surrounding upcoming elections, an ongoing debt issue, a government that's making greater demands on the central bank and high valuations have kept investors on the sidelines.

"The outlook is not very bright inside here, and all the sunshine is outside as of now," Jayant Manglik, president of Religare Broking Ltd., said from New Delhi.

Overall, stock funds took in a net Rs 6,160 crore ($866 million) in January, the least in two years and down 7 percent from the previous month, figures from the Association of Mutual Funds in India showed. After withdrawing money to start the year, foreign investors have only dipped their toes back in, with $117 million of inflows in February so far, according to data compiled by Bloomberg. Domestic participation in the equity market has "sharply slowed" and "abruptly dropped" this year, according to Rajesh Cheruvu, chief investment officer of WGC Wealth. Foreign portfolio investment flows into India have also been negative compared with other emerging markets, he added.

Concern the forthcoming election is far from a shoe-in for Prime Minister Narendra Modi has also cooled risk appetite. Investors question whether the nation will get a clear mandate from any of the pre-poll alliances or whether India will have a "weak post-poll coalition coming together and forming a government, which might not be very stable," Anand Shah, head of India investments at BNP Paribas Asset Management, said in a phone interview.

The India VIX Index has stayed above its three-year average this year, with a spike in cross-border tension only adding to the political uncertainty. High crude-oil prices have also worked against Indian equities and its currency, setting off a sell-off in the nation's assets. The rupee is Asia's worst currency this year, with a 1.9 percent slide.

With the S&P BSE Sensex Index now trading at 27 times earnings -- near a record -- and above its five-year average of 21 times, valuations may be less than attractive for investors. 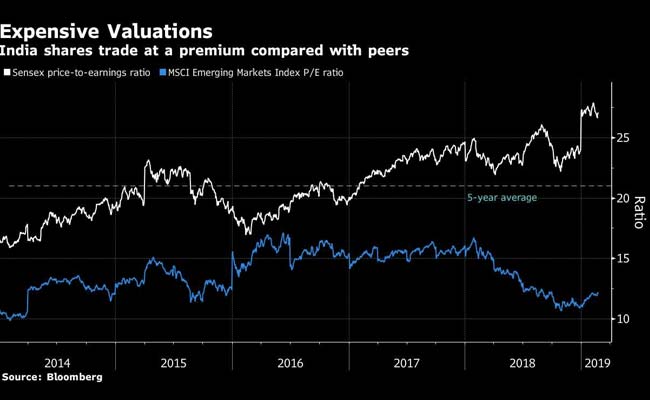 "If you want to maintain that kind of multiple, then obviously we need to show eventually that earnings growth will drive markets," Religare's Mr Manglik said.

And that may just be what's coming for India. The long-term outlook for profit growth is improving:

"Given that 2019 will be an election year, we cannot wish the volatility away; however, we believe that the earnings recovery, albeit delayed, will take center-stage after the elections," BNP Paribas Asset Management's Mr Shah wrote in his January outlook report, which he described as "a tale of two halves."

India has always had superior profit growth rate compared with other emerging markets and investors are seeing less disruption and more sustainability in the gains now than they have in the last four years, he said.

"The coming months will involve some volatility, for sure, as India's rambunctious electorate participates in what famously is the world's largest general election," he said. "Investors are likely to have the occasion to remind themselves that the best companies can gain share in a generally challenging environment. Long-term observers know that the opportunity in India remains very compelling."