Four of the country's 21 state banks have yet to appoint replacements for departed chief executive officers, and another has seen its CEO stripped of her powers due to fraud charges.

India's government-owned banks are becoming increasingly rudderless, just when they most need a firm hand at the top.

Four of the country's 21 state banks have yet to appoint replacements for departed chief executive officers, and another has seen its CEO stripped of her powers due to fraud charges. Over the coming months, nine more of the lenders are due to lose their top executives, at a time when spiraling bad loans and an intensified crackdown on financial sector-corruption make the jobs less appealing than ever.

"Attracting top talent to lead many of these state-run banks has become tough as an environment of fear is created," said Hemant Kanoria, chairman of SREI Infrastructure Finance Ltd., a non-bank company that lends to infrastructure projects in India. 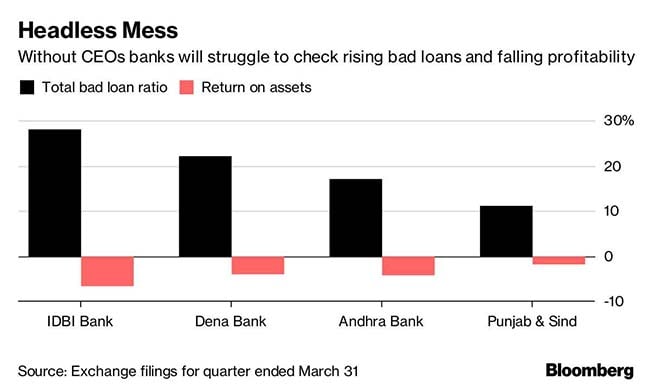 While it isn't the first time that top spots are empty at Indian banks, these vacancies come at an inflexion point in the nation's $210 billion bad-loan clean up, a crucial step to boost investment in Asia's No. 3 economy. Lack of leadership leaves these lenders struggling to formulate strategies and meet government conditions to win more funds under a record public bailout.

Andhra Bank, Dena Bank and Punjab & Sind Bank have had no CEOs since the start of this year, while the head of IDBI Bank Ltd. -- which has the highest bad-loan ratio among Indian lenders -- was named as deputy governor of the central bank on Monday. Allahabad Bank is effectively headless as it stripped CEO Usha Ananthasubramanian of her powers after she was formally charged last month over alleged involvement in a $2 billion fraud at a previous employer, Punjab National Bank.

Bank of Baroda, Canara Bank, UCO Bank, Indian Bank, United Bank of India and Corporation Bank are among lenders where the incumbent's tenure will end by March.

Another challenge in finding replacements is the low salaries on offer at state banks, when compared with their private sector peers. Ananthasubramanian earned about 3 million rupees ($45,000) at PNB in the year ended March 2017, about 5 percent of the 60 million rupees earned by Chanda Kochhar, the CEO of the country's second-largest private lender ICICI Bank Ltd. While this massive discrepancy was always the case, Kanoria said intensified scrutiny of state bankers has eroded the appeal of the jobs.

Current and former top executives at at least four banks are being investigated by federal authorities for allegations of impropriety.

Moreover, the government has said state banks will have to show that they're cleaning up their act if they want to win fresh capital injections. These reforms include selling non-core assets and setting up separate units to manage stressed assets, steps that would need top executives to sign off on them.

While the government used to directly appoint CEOs of state banks, triggering accusations of cronyism, in 2016 it created a Bank Board Bureau to independently handle top recruitment. When naming the new head of the bureau in April, the government pledged its commitment "not to interfere" in senior level appointments. CEOs are typically selected from among their peers for a term of three years.

"These banks, devoid of CEOs, don't have adequate capital or an appetite to lend," said Siddharth Purohit, a Mumbai-based analyst at SMC Global Securities Ltd. "To attract the right kind of talent to these positions may be tough in the current environment."
Comments
PSU banks