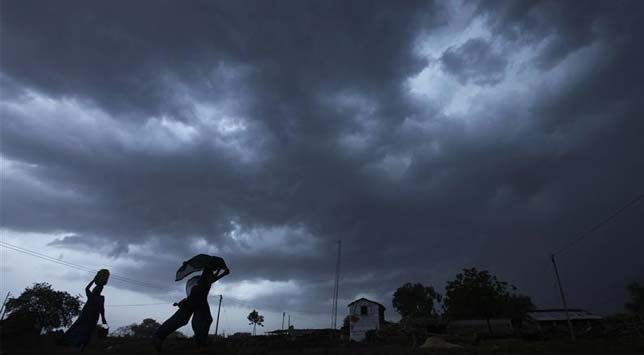 Monsoon rains will not be enough to save the country from its first drought in three years, the weather office said on Thursday as it forecast that the El Nino weather pattern should reduce rains again in the second half of the June to September season.

India, one of the world's largest food producers and consumers with a population of 1.2 billion, last suffered a drought in 2009, which forced it to import sugar, pushing global prices higher.

This time around, global grain prices are soaring as the United States wilts in its own drought - the worst in the country for half a century.

Monsoon rains are considered deficient - a drought in layman's terms - if they fall below 90 percent of a 50-year average.

The India Meteorological Department (IMD) said rains over the entire June to September season were now expected to be less than 90 percent of long-term averages. This is the first time it has forecast deficient rains at this point in the season.

Between June 1 and August 1, rainfall was about 19 percent below average, close to the 23 percent shortfall in the 2009 season.

Agriculture minister Sharad Pawar is touring the worst-affected states and ministers will meet again to discuss the situation when he returns to Delhi.

Poor monsoon rains have already pushed up food prices and Food Minister K. V. Thomas has said that the government is watching volatility in some commodity futures.

Some analysts do not see prices rising further. Gnanasekar Thiagarajan, director of Mumbai brokerage Commtrendz Research, said: "Most of the prices of agricultural commodities have already reacted to this deficient monsoon. Agri prices are not going to go up much from current levels; prices will take a breather right now."

The monsoon is vital for the 55 percent or so of farmlands that do not have irrigation. The four-month season accounts for 75 percent of the country's annual rainfall and half of that is usually delivered in June and July.

Any major shortfall in monsoon rains can hit rural incomes and reduce demand for gold and silver in India, one of the world's top consumers of the precious metals.

"Scrap will flood the market and gold imports could drop by 50 percent," said Prithviraj Kothari, president of Bombay Bullion Association.

The IMD had at first forecast a normal monsoon, with rains at 96 percent of averages.

"We expect normal rains in August, but they could be about 5-6 percent below average in September due to the possibility of El Nino, which has not influenced the monsoon so far," D.S. Pai, lead forecaster of the IMD, told Reuters.

"We expect the effect of El Nino in September and October, and not before," Pai said over the phone from the western city of Pune.

Rains had already improved in the second half of the key planting month of July, allowing planting of some crops to catch up with last year's levels. There was heavier rainfall in soybean areas of central India, cane areas of Uttar Pradesh state and the rice belt of eastern India.

However, rains continued to be below average in the interior south and western areas that grow pulses, coarse cereals, oilseeds and cotton.

Farmers have produced bumper grain harvests in recent years, providing the government with huge stockpiles of rice and wheat, which should buffer against any shortages.

But the country is a major importer of pulses and edible oils, so any shortages could trigger increased imports. The government has suggested that it might ask state trading companies to tender for pulses purchases.