The country's failure thus far to join China in global debt indexes is adding to investor concerns about meager inflation-adjusted yields and a widening fiscal deficit. 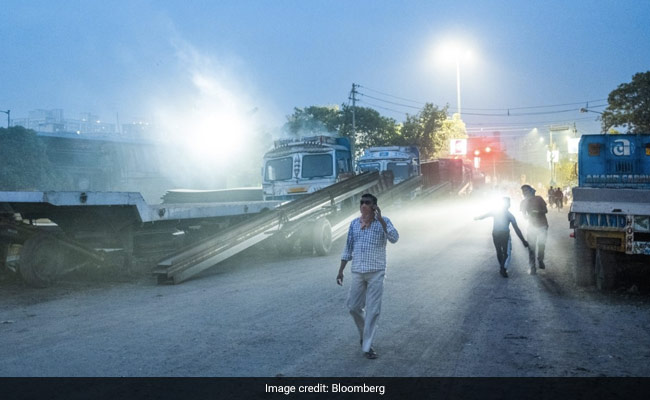 Foreign investors have never sold so much in a single year.

Even when viewed in isolation, the $14 billion outflow from India's bond market in 2020 is remarkable: Foreign investors have never sold so much in a single year.

That they did so at a time when Chinese bonds are attracting record foreign inflows underscores just how frustrated some money managers have become with the pace of capital-market reforms by Prime Minister Narendra Modi's government.

While China's steady progress on bond-market liberalization has earned it a spot in benchmark indexes and helped lure $119 billion of inflows this year, India still has some of Asia's toughest restrictions on foreign funds. The country's failure thus far to join China in global debt indexes is adding to investor concerns about meager inflation-adjusted yields and a widening fiscal deficit.

That could become a problem for PM Modi as his government borrows record amounts of money to fight the pandemic. While financing costs have remained subdued this year, the risk is that the growing supply of Indian bonds begins to outstrip local demand. That could put upward pressure on interest rates and restrain the recovery in Asia's third-largest economy from its deepest contraction on record. 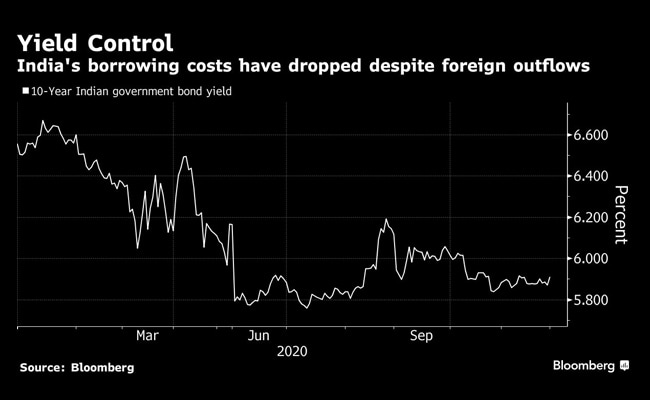 India's "financing needs have been growing significantly given the deterioration in fiscal deficits and it's therefore key for policy makers to establish a clear framework toward a gradual opening of the market," said Jean-Charles Sambor, London-based head of emerging markets fixed income at BNP Paribas Asset Management, which oversees about $727 billion.

In a response to questions from Bloomberg News, a finance ministry official said the government is making progress on debt-market reforms and expects to join global indexes in mid-2021. "We are now carrying out the process and institutional changes needed to allow all participants to be able to buy and sell rupee Indian bonds without difficulty," said Sanjeev Sanyal, a principal economic adviser in the finance ministry.

Bloomberg LP, the parent company of Bloomberg News and Bloomberg Barclays Indices, said in September 2019 it would help Indian authorities navigate a path to inclusion in international bond gauges.

Skeptics of bond-market liberalization have argued that India should tread carefully given the risk of hot-money flows that could destabilize the currency. That concern is one reason why PM Modi's administration quietly shelved a plan, initially floated in 2019, to sell its first foreign sovereign bonds.

It's also debatable whether the short-term benefits of opening to international bond investors outweigh the risks. The government's borrowing costs have declined this year despite foreign outflows, thanks in part to bond purchases by the nation's central bank. Foreign inflows into the stock market, meanwhile, have swelled to an eight-year high.

Yet as the government's borrowing needs increase, it may have a harder time finding enough bond buyers domestically. PM Modi's administration plans to borrow a record Rs 13.1 lakh crore ($178 billion) in the fiscal year ending March and is forecast to post a budget deficit equivalent to 8 per cent of gross domestic product, the largest shortfall in more than three decades. That comes at a time when yields on 10-year Indian bonds are hovering at around 6 per cent, almost a full percentage point below the inflation rate.

India has taken some small steps to open its bond market this year, including by removing ownership restrictions on certain types of government debt. But the moves have done little to stem the tide of outflows, with foreigners holding just 2 per cent of outstanding Indian bonds at the end of November. 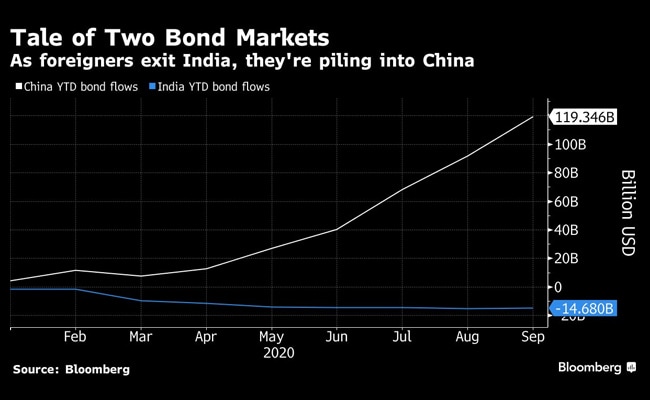 The reforms have also paled in comparison to those taken by China, whose debt is now included in -- or on a phased path to inclusion in -- benchmark indexes compiled by FTSE Russell, Bloomberg Barclays Indices and JPMorgan Chase & Co. JPMorgan kept India out of its widely followed GBI-EM Global Diversified index in September, citing among other shortcomings the country's capital controls, settlement issues and outdated trading requirements.

That doesn't mean international investors have given up on India entirely. Closer cooperation between local authorities and index providers, along with a more stable exchange rate, could help pave the way for eventual inclusion in indexes and more global portfolios, said Joevin Teo, head of Asia fixed-income at Amundi Singapore Ltd. 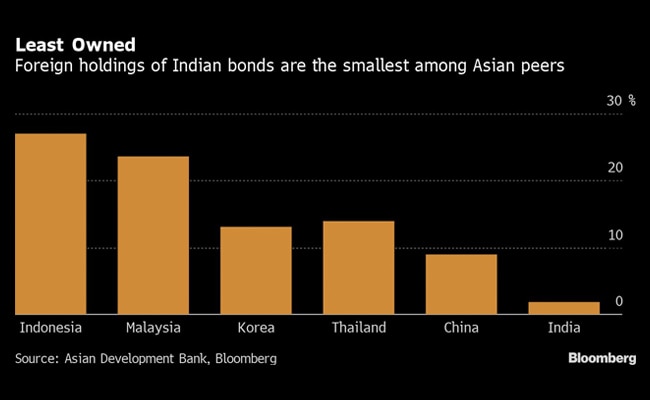 "The truth is that India is still in early stages," Mr Callegari said. "It should take one or two years to see the inclusion that would drive more bond investments in the country."