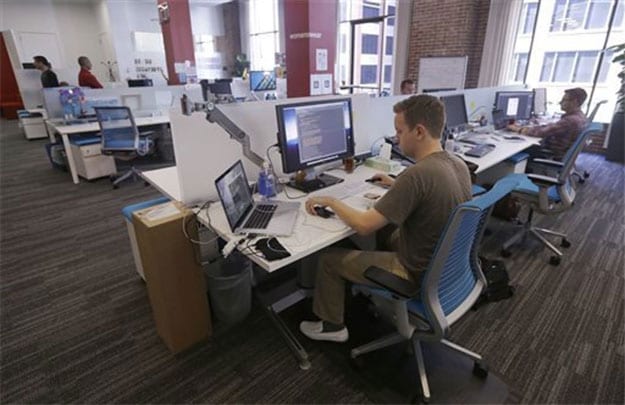 These are fabulous times in Silicon Valley.

Mere youths, who in another era would just be graduating from college or perhaps wondering what to make of their lives, are turning down deals that would make them and their great-grandchildren wealthy beyond imagining. They are confident that even better deals await.

"Man, it feels more and more like 1999 every day," tweeted Bill Gurley, one of the valley's leading venture capitalists. "Risk is being discounted tremendously."

That was in May, shortly after his firm, Benchmark, led a $13.5 million investment in Snapchat, the disappearing-photo site that has millions of adolescent users but no revenue. Snapchat, all of two years old, just turned down a multibillion-dollar deal from Facebook and, perhaps, an even bigger deal from Google. On paper, that would mean a fortyfold return on Benchmark's investment in less than a year.

Benchmark is the venture capital darling of the moment, a backer not only of Snapchat but the photo-sharing app Instagram (sold for $1 billion to Facebook), the ride-sharing service Uber (valued at $3.5 billion) and Twitter ($22 billion), among many others. Ten of its companies have gone public in the past two years, with another half-dozen on the way. Benchmark seems to have a golden touch.

That is generating a huge amount of attention and an undercurrent of concern. In Silicon Valley, it may not be 1999 yet, but that fateful year - a moment when no one thought there was any risk to the wildest idea - can be seen on the horizon, drifting closer.

No one here would really mind another 1999, of course. As a legendary Silicon Valley bumper sticker has it, "Please God, just one more bubble." But booms are inevitably followed by busts.

"All business activity is driven by either fear or greed, and in Silicon Valley we're in a cycle where greed may be on the rise," said Josh Green, a venture capitalist who is chairman of the National Venture Capital Association.

For Benchmark, that means walking a narrow line between hyping the future - second nature to everyone in Silicon Valley - and overhyping it.

Opinions differ here about exactly what stage of exuberance the valley is in.

"Everyone feels like the valley has been in a boom cycle for quite some time," said Jeremy Stoppelman, the chief executive of Yelp. "That makes people nervous."

John Backus, a founding partner with New Atlantic Ventures, says he believes it's more like 1996: Things are just ramping up.

The numbers back him up. In 2000, just as the dot-com party was ending, a record number of venture capitalists invested a record amount of money in a record number of deals. Entrepreneurs received more than $100 billion, a tenfold rise in dollars deployed in just four years.

Much the money disappeared. So, eventually, did many of the entrepreneurs and most of the venture capitalists.

Recovery was fitful. Even with the stock market soaring since the recession, venture money invested fell in 2012 from 2011, and then fell again in the first half of this year. Predictions of the death of venture capital have been plentiful.

For one thing, it takes a lot less money to start a company now than it did in 1999. When apps like Instagram and Snapchat catch on, they do so in a matter of months. Venture capitalists are no longer quite as essential, and they know it. Just last week, Tim Draper, a third-generation venture capitalist with Draper Fisher Jurvetson, said he was skipping the next fund to devote his time to his academy for young entrepreneurs.

But there are signs of life. Funding in the third quarter suddenly popped, up 17 percent from 2012.

"I think this is the best time we've seen since 1999 to be a venture capitalist," Backus said.

He expects the returns on venture capital, which have been miserable since the bust, to greatly improve this year.

"Everyone talks about the mega-win - who was in Facebook, Twitter, Pinterest," he said. "But the bread and butter of venture firms is not those multibillion exits but the $200 million deals, and there are a lot of those."

As an example he pointed to GlobalLogic, which operates design and engineering centers. It was acquired in October in a deal that returned $75 million on New Atlantic's $5 million investment.

Better returns would influence pension firms and other big investors to give more money to the venture capitalists, which would in term ramp up the number of deals.

"I would be really scared if all of sudden the industry raised $100 billion," Backus said. "But I don't know how you can stop that. The greed factor kicks in. Everyone wants a piece of action."

Benchmark is putting together a new investment fund. Given its recent track record, it could easily raise $1 billion from its limited partners. Instead, it will keep the fund to its usual size, $425 million. That is a hallmark of the discipline that has attended Benchmark since its founding in 1995. While other venture capital firms have bulked up, offering more services to entrepreneurs, Benchmark has stayed lean.

Its founding partners did not put their name on the door, a way of stressing that all were equal and would share in the profits equally. For Silicon Valley venture capitalists, this was a radical move. A rival venture capitalist told an industry publication that this was "communism."

Benchmark's first fund quoted Voltaire: "God is not on the side of the big arsenals, but on the side of those who shoot best." Its great dot-com hit was eBay, which was considered at the time the greatest venture capital success ever. In Randall Stross' fly-on-the-wall 2000 book, "eBoys," the partners are depicted as hardworking, smart and making it up as they go along, in the best venture capital tradition.

Now the partners are mostly different, but the one-for-all and all-for-one philosophy is the same, and the hits have kept coming.

Gurley, perhaps the best known of the partners at Benchmark, declined to be interviewed, as did the other partners, a spokeswoman said. But the executives of their portfolio companies were eager to discuss their skills.

Jess Lee, the chief executive of the shopping site Polyvore, said that Peter Fenton, the Benchmark partner on her board, was always encouraging long-term thinking.

"He wants us to focus on building the most impactful, sustainable business - an organization that lasts, versus take the best offer you can now," said Lee in a phone interview from a Goldman Sachs conference in Las Vegas.

When the Snapchat news was breaking, Gurley did not post another reference to 1999, the year the venture capital industry went crazy and valuations of revenue-less companies like Snapchat rose to incredible levels. Instead, he promoted the service, noting that "many adults still don't understand the draw of Snapchat." He has also pointed out that many enduring companies had no revenue in the beginning.

Promoted
Listen to the latest songs, only on JioSaavn.com
Half of Silicon Valley argues that Snapchat is a flash in the pan, which means its fate will be revelatory as well as entertaining to watch. Perhaps it will indeed rank with the likes of Google or Yahoo. Or perhaps it is Pets.com.