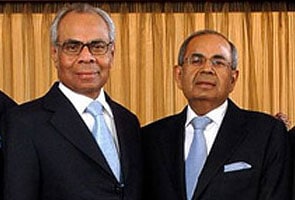 A file photo of Srichand and Gopichand Hinduja

The Hindujas, owners of the Hinduja Group conglomerate, have emerged as the third richest family in Britain, according to an analysis by anti-poverty charity Oxfam released on Monday.

The latest rich list from 'Forbes' magazine showed that London-based Srichand and Gopichand Hinduja have a combined wealth of $10 billion, Oxfam said in its report titled 'A Tale of Two Britains'.

The five top UK entries analysed for its report found the family of the Duke of Westminster as the richest, followed by David and Simon Reuben, the Hndujas, the Cadogan family, and Sports Direct retail boss Mike Ashley, who between them had property, savings and other assets worth 28.2 billion pounds, or $46.81 billion (with respect to 1 pound = $1.66).

The report implies that Britain's five richest families now own more wealth than the poorest 20 per cent of its population, with their wealth totalling 28.1 billion pounds - an average of 2,230 pounds each.

The UK government should explore the possibility of a wealth tax after revealing how income gains and the benefits of rising asset prices had disproportionately helped those at the top, Oxfam said.

"Britain is becoming a deeply divided nation, with a wealthy elite who are seeing their incomes spiral up, while millions of families are struggling to make ends meet," Oxfam's director of campaigns and policy, Ben Phillips, said.

"It's deeply worrying that these extreme levels of wealth inequality exist in Britain today, where just a handful of people have more money than millions struggling to survive on the breadline."

The charity has urged UK Chancellor George Osborbe to use his Wednesday's Budget to make a fresh assault on tax avoidance and introduce a living wage in a report highlighting how a handful of the super-rich.

The report asserted that widening inequality is creating a "vicious circle where wealth and power are increasingly concentrated in the hands of a few, leaving the rest behind".

Promoted
Listen to the latest songs, only on JioSaavn.com
"This means the rules are constantly rewritten in favour of the rich, for example through policies such as lower taxes for high earners."

In January, an Oxfam report found that the richest 85 billionaires on the planet own the same amount between them as half the world's population, or 3.5 billion people.