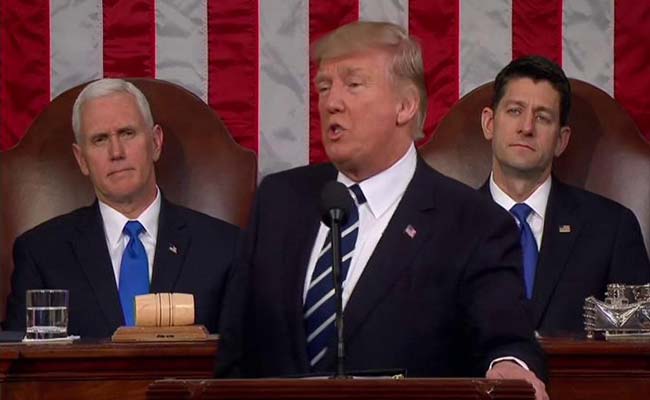 President Donald Trump opened the door to an overhaul of the U.S. immigration system and vowed to pursue massive tax relief for the middle class in a speech to Congress on Tuesday as he sought to rebound from a chaotic start to his presidency.

Following are some of the main themes of Trump's speech:

Trump promised new steps shortly to "keep out those who would do us harm" and said his administration had been working on improved vetting procedures. He said the vast majority of people convicted for terrorism-related offenses since the attacks on Sept. 11, 2001, had come from outside the United States and vowed the country should not "become a sanctuary for extremists".

He said the United States should switch away from lower-skilled immigration and adopt a merit-based system, adding that Republicans and Democrats could work together to achieve immigration reform as long as it focused on improving jobs and wages and strengthening the country's security.

Construction of a wall on the U.S.-Mexico border will begin soon, Trump said. Throughout his election campaign and in the first weeks of his presidency, Trump said Mexico would pay for the wall, but he made no mention of that on Tuesday.

Trump called on Congress to repeal and replace Obamacare. He said reforms should lower the cost of healthcare and ensure people with pre-existing conditions have access to coverage.

He proposed tax credits and expanded health savings accounts for people to purchase health insurance. Legal reforms should also protect patients and doctors from unnecessary costs that drive up the price of insurance, he said.

Trump vowed "historic" reform to reduce the corporate tax rate to make U.S. companies more globally competitive and promised "massive" tax relief for the middle class. He gave no new details on the tax reforms he would like to see and made no mention of a border adjustment tax that lies at the heart of a Republican proposal in the House of Representatives.

Trump said Congress will be asked to approve legislation for a $1 trillion investment in infrastructure, financed through both public and private channels. "Buy American" and "Hire American" will be the guiding principles, he said.

Trump promised to send to Congress a budget to rebuild the military, billing it as one of the largest-ever increases in defense spending. He vowed to work with U.S. allies, including in the Muslim world, to destroy Islamic State, describing the radical militant group as a "network of lawless savages."

Promoted
Listen to the latest songs, only on JioSaavn.com
He vowed support for NATO but said U.S. partners must meet their financial obligations. He also reaffirmed "our unbreakable alliance" with Israel.
© Thomson Reuters 2017

US Economy Sheds 7 Lakh Jobs In March Amid Coronavirus Crisis