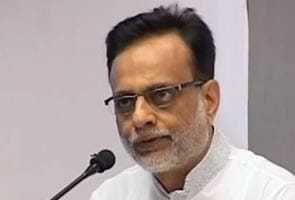 Mr Sandhu, a 1980 Rajasthan cadre IAS officer, has been made Chairman of the National Authority for Chemical Weapons Convention.

The Appointments Committee of the Cabinet has approved appointment of Mr Adhia as Secretary of Department of Financial Services, Ministry of Finance, according to a late night statement issued by the Department of Personnel and Training (DoPT).

Promoted
Listen to the latest songs, only on JioSaavn.com
This is the third secretary level change in the Finance Ministry after former revenue secretary Rajiv Takru was shifted to the Department of North Eastern Region and former finance secretary Arvind Mayaram was first shifted to Tourism Ministry and later to the Minority Affairs Ministry.

The transfers come amid the Finance Ministry preparing the work for Budget 2015-16.

Two days ago, Prime Minister Narendra Modi had an interaction with secretaries of various ministries and departments. According to sources, Mr Modi had said the Budget should be "output to outcome-oriented", inferring that investments should have measurable outcomes.