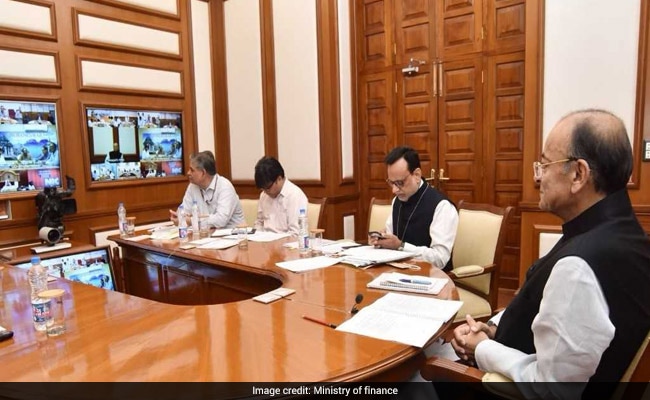 The GST Council on Friday paved way for the single form GST return based on the recommendations of the GoM (group of ministers) on IT simplification. The GST return filing will now happen only once every month compared to the three returns a month followed earlier. Union Finance Secretary Hasmukh Adhia claimed that the newly introduce monthly return filing system will be effective in the next six months and the present system of filing of return through GSTR 3B and GSTR 1 forms would continue for not more than six months. Besides this, the GST council meet on Friday also gave a green signal to making the GST Network a government entity as it is set to take over the 51% stake that is currently being held by the private entities. The meet of GST Council, the highest decision making body in the GST regime, on Friday was held via video conferencing since the Union finance minister Arun Jaitley is not keeping well and under the medical supervision for his kidney and infection related ailments.

1. Monthly Return: GST Taxpayers excluding a few exceptions like composition dealer shall file one monthly return. Return filing dates shall be staggered based on the turnover of the registered person to manage load on the IT system. Composition dealers and dealers having nil transaction shall have facility to file quarterly return. Vishal Raheja, DGM GST, Taxmann, welcomed the simplification of GST filing process. He said,"One of the major decision for simplified return has been finally approved by the Council. This has been a significant step as one return in place of three monthly returns is a welcome move."

3. Simple Return design and easy IT interface: The B2B dealers will have to fill invoice-wise details of the outward supply made by them, based on which the system will automatically calculate his tax liability. The input tax credit will be calculated automatically by the system based on invoices uploaded by his sellers. Taxpayer shall be also given user friendly IT interface and offline IT tool to upload the invoices.

4: Proposal of concession on digital transactions: Keeping in view the need to move towards a less cash economy, the Council has discussed in detail the proposal of a concession of 2% in GST rate (where the GST rate is 3% or more, 1% each from applicable CGST and SGST rates) on B2C supplies, for which payment is made through cheque or digital mode, subject to a ceiling of Rs. 100 per transaction, so as to incentivise promotion of digital payment.

The council has recommended for setting up of a Group of Ministers from State Governments to look into the proposal and make recommendations, before the next Council meeting, keeping in mind the views expressed in GST Council.

5. Cess on Sugar above 5% GST rate: The council deliberated over the imposition of cess on sugar over and above 5% GST and also over the reduction in GST rate on ethanol. Keeping in view the record production of sugar in the current sugar season, and consequent depressed sugar prices and build-up of sugarcane arrears, the Council discussed the issue of imposition of sugar cess and reduction in GST rate on ethanol in great detail. The council has recommended for setting up of a Group of Ministers from State Governments to look into the proposal and make recommendations, within two weeks, keeping in mind the views expressed in GST Council in this regard.
Comments
GST CouncilGST Council meetArun Jaitley

GDP Growth At 4.5% In July-September Quarter, Here's What Experts Say