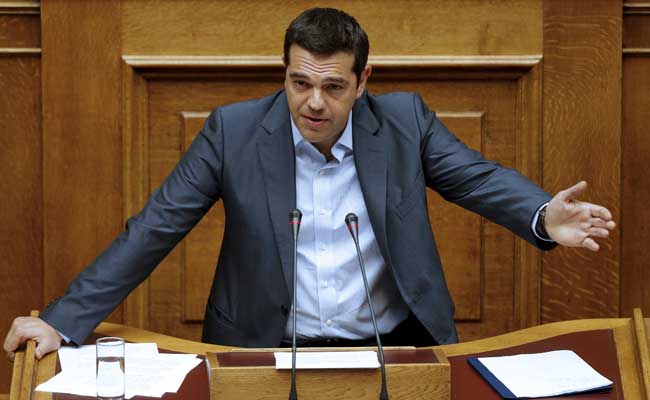 The firebrand leftist cemented his position as Greece's dominant political figure on Sunday in national elections in which his Syriza party won 145 of 300 parliamentary seats.

But he faces a tough start to his second term in office, implementing austerity mandated by creditors while seeking debt relief and coping with waves of refugees landing on Greece's shores that have put the country on at the front line of the largest migration flows Europe has seen since World War Two.

He may also need to work harder than he hoped to maintain what promises to be a volatile coalition between Syriza and the right-wing Independent Greeks party, which won 10 seats.

Independent Greeks lawmaker Dimitris Kammenos resigned as deputy infrastructure and transport minister on Wednesday hours after his appointment due to allegations - which he denied - that he posted anti-Semitic and homophobic comments online.

"This mandate is translated into one word; work," Tsipras told the first meeting of his cabinet.

It features most of the faces from the Tsipras government that held power for seven months until he called snap elections in August, including Euclid Tsakalotos, an Oxford-trained Marxist economist who built up a relationship of trust with lenders in negotiating the bailout agreement.

The charismatic Tsipras also told his 44-member cabinet: "I chose you as ministers to govern, and solve people's problems. Not to be on early morning TV chat shows."

'CRISIS WITHIN A CRISIS'

A first review of progress in implementing Greece's third, 86-billion-euro ($96 billion) bailout is due to start in October

If the review goes well it will open the way towards debt relief, a rallying cry for the Greek government, which argues that a mountain of dues accumulated since its first bailout in 2010 is not viable, shackling the country in perpetuity.

Other priorities, he said, included a recapitalisation of Greece's banks, which, "if done correctly, can give our economy badly needed liquidity."

In the bailout package, which is contingent on pension reform, ending tax breaks, labour reforms, and privatisations, up to 25 billion euros has been set aside for shoring up the capital of Greece's banks.

They have been hobbled by deposit flight earlier this year and a mountain of non-performing loans, a consequence of a crippling six-year economic recession.

Some 40 percent of loans on bank balance sheets are non-performing, one of the highest rates in Europe. Non-performing loans (NPLs) typically limit a bank's ability to lend, feeding into a recessionary spiral.

Tsipras said that the bailout accord included some areas in which Greek authorities had room to manoeuvre. That included regulating NPLs to protect primary residences from foreclosure, and finding alternatives to further pension cuts.

"We are fully aware of the difficulties ahead, since we brought this deal," said Tsipras, adding that authorities had the 'antidote'.

But highlighting a 'crisis within a crisis', Tsipras said the government's task was compounded by Europe's migrant flows.

Greece has also become the main point of entry into Europe for those fleeing war and poverty in the Middle East, most of whom then head by land to richer EU countries further north.

Greece has highlighted discord among its EU partners on how best to deal with the crises.

"We have to decide what Europe we want," Tsipras said. "Do we want a Europe of solidarity or one which throws teargas?"