India's admission of a record budget deficit is drawing praise from investors, who see it as baby steps to making data out of Asia's third-largest economy less opaque

India's admission of a record budget deficit is drawing praise from investors, who see it as baby steps to making data out of Asia's third-largest economy less opaque and aiding its goal of becoming part of global bond indices.

Finance Minister Nirmala Sitharaman this month said the nation's fiscal deficit -- the gap between income and expenditure -- will widen to 9.5% of gross domestic product in the current fiscal year ending March and be at 6.8% in the period starting April. Both numbers were wider-than-expected as they factored in off-budget borrowings through state-run enterprises to fund the government's expenditure. 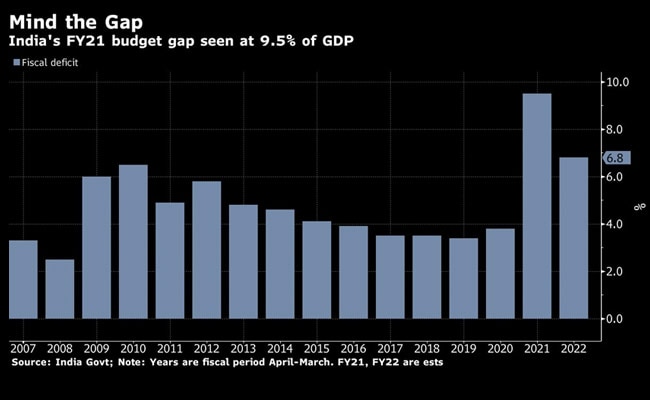 Until now, India used optimistic revenue projections based on questionable growth estimates and off-budget borrowings to artificially keep its fiscal deficit numbers lower than what it really was -- a practice that has drawn criticism in the past from the International Monetary Fund, global investors and central bankers alike. The government is now getting quite the opposite reaction.

"The budget did not seek to downplay the fiscal deficit via unrealistically optimistic revenue forecasts or via borrowings off balance sheet," said Joevin Teo, head of Asian fixed income at Amundi Asset Management in Singapore. "Foreign investors are likely to welcome this higher level of transparency in the budget."

Teo sees this boosting the economy's credibility and easing the way for India's path to inclusion in global bond indices. That should help spur inflows into the nation's $960-billion sovereign debt market where foreigners own just over 2% in assets.

For now, the yield on India's 10-year notes have surged amid concerns about the government's massive borrowings and the lack of a detailed plan on how the central bank will absorb it.

"While rising rates will be negative to the bond market, larger than expected stimulus and capital expenditure is positive for growth," Arthur Lau, head of fixed income in Asia-ex Japan at PineBridge Investments Asia Ltd, said, adding that inclusion of Indian government bonds into major bond indices will likely happen in the medium term.

The wider-than-expected deficit in itself reflects adoption of better accounting processes, according to economists. Food subsidy allocations have increased as Prime Minister Narendra Modi's government decided to count the off-balance sheet loans of Food Corp. of India as part of the budget, pushing up the share of major subsidies as a percentage of GDP to 3.3% this year from 1.3% a year ago, according to Priyanka Kishore, head of South and Southeast Asia economics at Oxford Economics in Singapore.

While the budget sets about a huge capital expenditure plan to help the economy recover from a pandemic- induced recession, it is also banking on sizable proceeds from asset sales. Any shortfall in raising money could see the gap widening even more by pushing up the government's near-record borrowing in the new fiscal year.

But officials are confident that the move toward greater transparency will help them win investors over.

"We felt it had to be done some day and the sooner the better," said T.V. Somanathan, the bureaucrat in charge of the government's spending decisions. "This transparency will be good for us and for the public, and the markets. If there was any virtue in the earlier system, and there was, it has outlived its usefulness."

That attitude is already winning praise from investors and rating companies.

India "should be applauded for being upfront given past criticisms over massaging the deficit figure," said Ian Simmons, a London-based fund manager at Fiera Capital. "Anything which enhances their credibility should be seen as a positive."

Moody's Investors Service said that while the deficit projections are larger than it expected, they reflect both credible budgetary assumptions and greater transparency. Fitch Ratings mirrored that view, while saying that the wider deficits and a more gradual pace of consolidation would lift India's government debt and put more onus on the nominal GDP growth outlook.

Any slippage in growth therefore could hurt the economy, with implications for its rating. Both Moody's and Fitch rate India at the lowest investment grade, with a negative watch.

"The larger fiscal deficit is likely to increase rating pressures, although we think rating agencies may wait to see whether the stimulus packaging will translate into more robust growth," said PineBridge's Lau. "This in turn should mitigate downgrade rating pressures."