Government to Bring Down Stake in PSU Banks to 52 Per Cent: Finance Minister 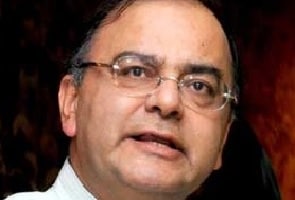 New Delhi: Finance Minister Arun Jaitley has said the government is planning to bring down its stake in public sector banks to 52 per cent so as to meet the capital requirement of Rs 3 lakh crore.

"We are also trying to bring down the governmental equity in the banks to about 52 per cent so that a large amount of capital, almost closing to Rs 3 lakh crore, can be introduced into banks itself, so that they have a lot more resources for financial inclusion," he said on Sunday.

In 2010, the then Cabinet had approved a proposal to keep the minimum shareholding of government to 58 per cent in the public sector banks in order to provide buffer for the future.

As per law, government holding at any moment must not come below 51 per cent to maintain the public sector character of PSU banks.

At present, government shareholding in various banks varies between 56.26 per cent (Bank of Baroda) and 88.63 per cent (Central Bank of India).

Mr Jaitley in the Budget speech had said that "to be in line with Basel-III norms, there is a requirement to infuse Rs 2,40,000 crore as equity by 2018 in our banks".

Promoted
Listen to the latest songs, only on JioSaavn.com
"To meet this huge capital requirement we need to raise additional resources to fulfil this obligation," he had said.

While preserving the public ownership, the capital of these banks will be raised by increasing the shareholding of the people in a phased manner through the sale of shares largely through retail to common citizens of this country, the minister had said.