Tax department had managed to collect only Rs 7.3 lakh crore as of January 23.

India's corporate and income tax collection for the current year is likely to fall for the first time in at least two decades, over half a dozen senior tax officials told Reuters, amid a sharp fall in economic growth and cut in corporate tax rates.

Prime Minister Narendra Modi's government was targetting direct tax collection of Rs 13.5 lakh crore for the year ending March 31 - a 17 per cent increase over the prior fiscal year.

However, a sharp decline in demand has stung businesses, forcing companies to cut investment and jobs, denting tax collections and prompting the government to forecast 5 per cent growth for this fiscal year - the slowest in 11 years.

The tax department had managed to collect only Rs 7.3 lakh crore as of January 23, more than 5.5 per cent below the amount collected by the same point last year, said a senior tax official.

After collecting taxes from companies in advance for the first three quarters, officials typically garner about 30-35 per cent of annual direct taxes in the final three months, data from the past three years shows.

But eight senior tax officials interviewed by Reuters said despite their best efforts direct tax collections this financial year were likely to fall below the Rs 11.5 lakh crore collected in 2018-19. 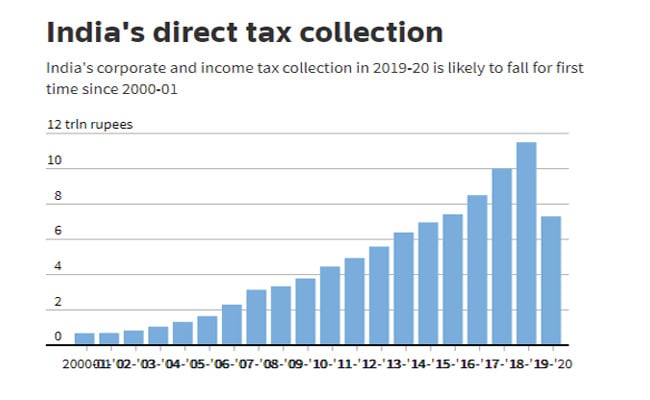 "Forget the target. This will be the first time that we'll see a fall in direct tax collection ever," said a tax official in New Delhi.

He estimates that direct tax collections for this year could end up roughly 10 per cent below fiscal 2019.

Direct taxes typically account for about 80 per cent of the government's projections for annual revenue, and the shortfall may leave the government needing to boost borrowing to meet expenditure commitments.

The tax officials also say that a surprise cut in headline corporate tax rate last year aimed at wooing manufacturers and boosting investment in Asia's third-biggest economy is another key reason behind the sluggish tax collections.

"We'll be very happy if we can even breakeven with what we collected last year," said another senior tax official in the financial capital Mumbai, the biggest tax generator, accounting for about a third of revenues from direct taxes. "But given the state of the economy, I'm not too hopeful."