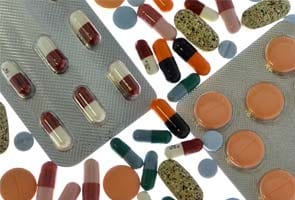 New Delhi: The government has brought 18 more drugs, used to treat cancer, inflammation and infections, among others, under price control as part of its efforts to make life saving medicines affordable in the country.

In a statement, the National Pharmaceutical Pricing Authority (NPPA) said "it has fixed/revised the prices in respect of 39 formulation packs ... and one corrigendum ... related to the ceiling price fixation of Paclitaxel injection".

According to the notification, the prices of formulations including Diclofenac Sodium, Clotrimazole, Mesalamine, Omeprazole+Domperidone and Vancomycin have been fixed.

The new medicines are the latest additions to the price control list, which covers over 500 drugs.

Last month, drug pricing regulator NPPA had capped the prices of 39 formulation packs, including those used to treat various diseases such as diabetes and digestive disorders.

At present, the government caps prices of essential drugs based on the simple average of all medicines in a particular therapeutic segment with sales of more than 1 per cent.

In other cases, companies are allowed to hike prices by only up to 10 per cent in a year.