Gold prices edged lower, as an uptick in the dollar and fears of aggressive rate hikes dented bullion's appeal. 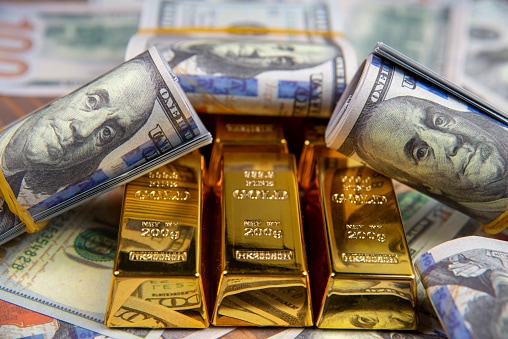 Gold prices edged lower on Friday, as an uptick in the US dollar and fears over aggressive rate hikes by major central banks to tame inflationary pressures dented bullion's appeal.

Bullion was still set for its first weekly gain in six, up nearly 0.5 per cent so far this week.

The dollar rose 0.2 per cent against its rivals, making greenback-priced bullion more expensive for buyers holding other currencies.

"Gold is in a downtrend and the rallies that are setting in are short-lived because gold is being pressured by the fact that inflationary expectations are coming down," said Edward Meir, an analyst with ED&F Man Capital Markets.

The European Central Bank joined global peers in a fight against soaring inflation as it raised interest rates by more than expected on Thursday, despite the euro zone economy suffering from the impact of Russia's war in Ukraine.

The US Federal Reserve policy meeting is due next week where policymakers are expected to raise interest rates by 75 basis points.

"We waiting to hear how hawkish will their (Fed) guidance be on rates. If they still think inflation is a problem or going to still ram through more interest rate hikes, that's going to be very bearish for gold," Meir said.

Data on Thursday showed the US weekly initial jobless claims rose to a fresh eight-month high and factory activity for July slumped, the latest indication the US economy is slowing under the weight of strong interest rates and inflation.