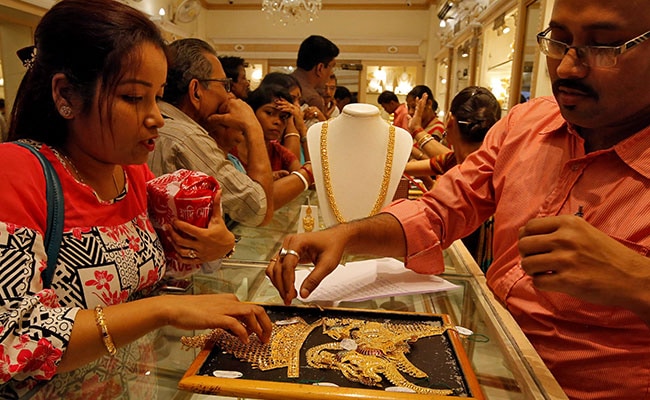 Gold fell on Monday as investors looked to the safety of the dollar to stave off risks from the US-China trade spat, as concerns mounted over a slowdown in global growth.

"The dollar seems to be the main beneficiary of the fears of economic slowdown, pushing gold down," said Mitsubishi analyst Jonathan Butler.

"But gold has managed to be above $1,300 level, which is a fairly solid and decent support level since there are some downward pressures right now."

The dollar index was at a near six-week high, making the greenback-denominated gold more expensive for holders of other currencies.

The dollar has risen despite the Federal Reserve pausing its multi-year rate hike cycle and dovish comments from several Fed officials, which pushed gold to a nine-month high at $1,326.30 in late January.

While gold is supported by the Fed's policy, prices will likely remain range-bound until there is clarity on the trade front and US government shutdown, OANDA analyst Edward Moya said in a note.

Investors' focus will be back on the trade talks between Beijing and Washington this week as a delegation of US officials travels to China for the next round of negotiations.

US President Donald Trump said last week that he had no plans to meet with Chinese President Xi Jinping before a March 1 deadline to achieve a trade deal.

Also, in the latest development surrounding political gridlock in Washington, talks on border security funding collapsed after Democratic and Republican lawmakers clashed over immigrant detention policy as they worked to avert another US government shutdown.

Adding to a string of disappointing global economic data, especially in the euro zone, official figures on Monday showed Britain's economy slowed as expected in the final three months of last year, pushing growth in 2018 to its weakest in six years, as Brexit worries hammered investment.