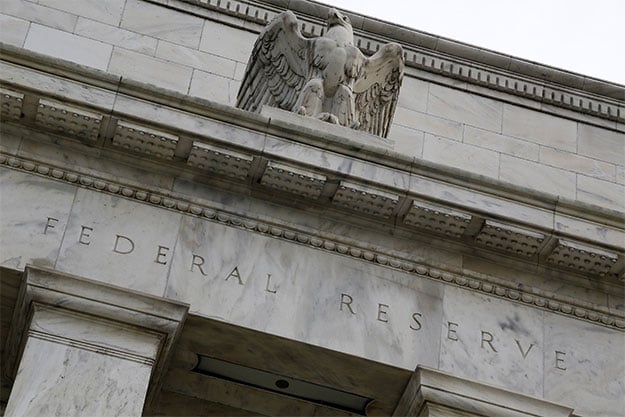 Some of the biggest global investors have started to pull back from riskier fixed-income assets even as the Federal Reserve keeps on a green light for risk.

Loomis Sayles, GAM, and Standish are among those who say US investment grade and high yield corporate bond prices have gone too far, making returns less compelling. They're aiming to get ahead of a market reversal that could be unpleasant once the Fed starts raising interest rates, probably next year.

"Valuations are getting stretched," said Jack Flaherty, investment manager at GAM, part of GAM Holding AG, a publicly-listed Swiss company with more than $120 billion in assets. "You'd rather be early in getting out because when it does turn, it could be more violent than expected."

Bonds had a solid start to 2014, with the Barclays US Aggregate Index returning about 3.8 per cent for the first six months of the year. Interest from overseas investors and pensions has kept flows into fixed income funds strong.

That has reduced the extra premium investors are willing to pay to hold these bonds instead of the safer US Treasuries. This premium, or spread, is now at its lowest since 2007, and suggests confidence in the prospects of the US Corporation issuing the debt.

GAM has pared its US high-yield bond holdings, and plans to cut back more over the next few months. It's re-allocated to emerging market local debt and convertible bonds - debt that can be converted into shares of stock.

Flaherty is concerned that after the Fed raises rates, liquidity could be a big problem because of Wall Street brokerages' reduced presence in the corporate bond market.

In the past, big banks could be counted on to make it easier to buy and sell bonds because of their sizable inventory. But new rules have made it more costly to hold such assets.

The premium investors demand to hold US high yield debt was about 353 basis points as of Monday, according to Bank of America-Merrill Lynch data. That premium is much lower than the fair value estimate of 551 basis points put out by Marty Fridson, one of Wall Street's high yield experts who's now chief investment officer at Lehmann, Livian, Fridson Advisors in New York.

The spread between US investment grade and US Treasuries was 109 basis points.

The yield on a US high-yield bond fell to 4.8 per cent, the lowest ever for this asset class, although on Monday, the yield has climbed to 5.28 per cent. In the case of US investment grade bonds, the yield was about 2.97 per cent.

"The longer the Fed goes on, the more disruptive it would feel like when it ends," said David Horsfall, co-deputy chief investment officer at Standish Mellon Asset Management in Boston. The firm oversees $160 billion in fixed-income assets.

"When the Fed raises rates on the short end, it would almost always cause a disruption. It has to, because rates have been so low."

Horsfall said the firm's US investment grade holdings at one point were as much as 60 per cent of its portfolio, and now has been reduced to 5 to 6 per cent. For US high-yield bonds, Standish held as much as 40 per cent, but has cut that to 8 to 10 per cent.

Standish has instead re-allocated to New Zealand and Australian bonds, as well as US Treasury Inflation-Protected Securities (TIPS), which rally if inflation rises.

Prudential Fixed Income, with about $418 billion of assets under management, has also reduced its risk the past month, said Gregory Peters, managing director and senior investment officer. The firm has sold high-yield bonds that have fundamentals they're not comfortable with, he said.

"You want to be more careful from a credit perspective," said Peters. "The market is not going to reward bad credit stories this late in the cycle."

Prominent investor Dan Fuss said his $24.4 billion Loomis Sayles Bond Fund is sitting on more than 25 per cent of short-term US and short-term Canadian government debt, cash and cash equivalents, its highest level ever, because he sees scant opportunities in the bond market.

Fuss, vice chairman and portfolio manager at Loomis Sayles, which oversaw $210 billion as of March 31, said the Loomis Sayles Bond Fund has been moving into these areas since early 2013 as bonds have become increasingly pricey.

US corporate bond inflows have been strong, boosted by the prospect of higher yields than US Treasuries without the risk of equities.

With volatility low, a selloff seems unlikely now, said Lehmann's Fridson. "The Fed will not raise interest rates until 2015. So until then, investors don't have to worry about it."

Some money managers have argued that despite the decline in spreads, there is room for further contraction. Mary Kane, portfolio manager and a partner at GW&K in Boston, believes there is a further 100-point narrowing in US high-yield and 50-point contraction in US investment grade.

"It's a game of relativity. In a world of zero percent, 5 per cent yield (on junk bonds) is pretty good," said Kane, whose firm has about $20 billion in assets under supervision.

Decent returns are still possible in the corporate bond space, said GAM's Flaherty. "And when that's over, people say they can get out in time. But can they really get out when everybody is at the door?"