GDP Growth At 6.6% In December Quarter, Slowest In Over A Year

The economic growth for the previous quarter (July-September) was revised down to 7.0 per cent from 7.1 per cent, according to the official statement.

The RBI has projected a GDP growth of 7.2-7.4% for the first half of the next financial year

India's GDP or gross domestic product growth stood at 6.6 per cent in the quarter ended December 31, 2018, government data showed on Thursday. That marked the slowest rate of GDP expansion recorded since the quarter ended September 2017, and lower than economists' estimate. According to a poll by news agency Reuters, the median forecast from more than 55 economists polled on February 19-25 was for a GDP growth of 6.9 per cent.

The economic growth for the previous quarter (July-September) was revised down to 7.0 per cent from 7.1 per cent, according to the official statement. The growth rate in the third quarter of current financial year also marked a significant drop from 8.0 per cent in April-June 2018. 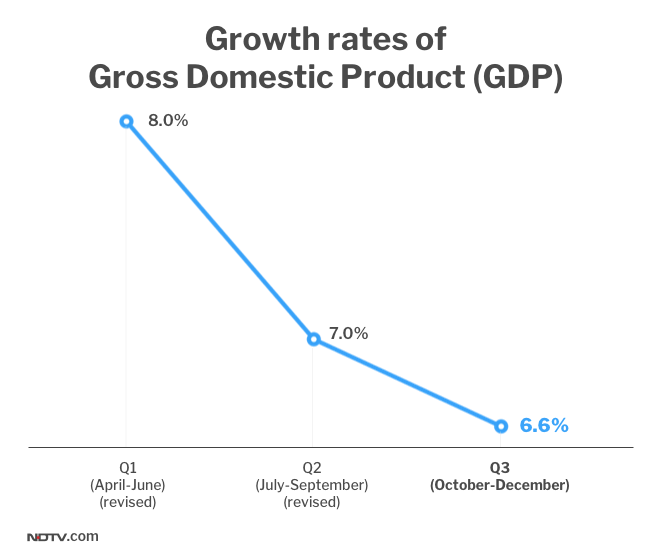 Economists said the slowdown may lead to another rate cut by the central bank in its April policy review.

"I had expected the overall GDP growth for FY19 to get revised downwards, as the farm sector had suffered due to extremely uneven rainfall, depleted water reservoir levels in key agrarian states and their impact on sowing of food grains…The GDP data has correctly captured these events,” said Rupa Rege Nitsure, group chief economist, L&T Finance Holdings. (What economists say)

The Central Statistics Office (CSO) has projected GDP growth to average at 7.2 per cent in the current financial year (2018-19).

The Reserve Bank of India, however, has estimated GDP growth at 7.4 per cent in 2018-19. A slowdown in GDP growth momentum supported the central bank's dovish turn earlier this month when it cut key interest rates and changed its policy stance to "neutral" to boost expansion after a sharp fall in inflation.