From Paytm To Reliance Power: Big IPOs With The Worst Debut Day Performance

Paytm, India's largest IPO to date, closed 27% below the issue price on listing day. It impacted sentiment in the entire stock market. The flop show should not come as a surprise to you as this is not the first time a high-profile IPO has eroded investors wealth on listing day.

Paytm shares closed 27% below the issue price on listing day.

Were you surprised with Paytm's stock market debut?

India's largest IPO to date closed 27% below the issue price on listing day. It impacted sentiment in the entire stock market.

Paytm's flop show should not come as a surprise to you as this is not the first time a high-profile IPO has eroded investors' wealth on listing day. There have been several such IPOs in the past.

Let's take a look at the mega IPOs with the worst debut day performance. We have considered IPOs with issue size of more than Rs 1,000 crore.

Shareholders of One 97 Communications, the operator of leading digital payments platform Paytm, were caught in a complete bear trap on listing day.

Shares of Paytm started their journey with a 27.2% fall over its IPO price last week on Thursday. Shares hit the lower circuit at around 3:00 pm, and trading in the stock was halted.

This selloff wiped out around Rs 40,000 crore of investor wealth on the first day. Interestingly, this is more than the entire market cap of companies like TVS Motors, Tata Communication, MRF, and Oberoi Realty.

Paytm shares are again caught up in the selloff today. They are down over 12%.

Due to this huge selloff, the markets regulator is now planning to question the investment banks that handled Paytm's IPO. The regulator will seek their views on why the stock tanked on the listing day.

It also plans to examine if any comments made by the company officials or the bankers could have misled investors.

The weak listing was on the cards as market experts were already cautious on Paytm's high valuation, muted investor response, and loss-making business. But such a big fall was unexpected.

But despite the dip, the company clocked a valuation of over Rs 1 lakh crore.

Shares of Coffee Day Enterprises closed down nearly 18% at Rs 270, against its issue price of Rs 328 on debut.

Coffee Day Enterprises, which runs Cafe Coffee Day (CCD) outlets, had raised Rs 1,150 crore through its IPO. The issue was subscribed 1.64 times at a price band of Rs 316-328 per share.

In March 2015, the firm had mobilised Rs 100 crore in a pre-IPO funding from Nandan Nilekani and Rare Enterprises (promoted by Rakesh Jhunjhunwala), among others.

At a press conference ahead of its IPO, V G Siddhartha was asked why its offer price was lower than a private placement just a few months earlier. He replied that he wanted to leave some money on the table for retail and institutional investors.

In 2020, trading in Coffee Day shares was suspended for not complying with listing norms pertaining to submission of quarterly financial results. Shares resumed to trade this year 26 April onwards.

Since listing, shares of the company have been on a downtrend and have hardly traded many times above its issue price. 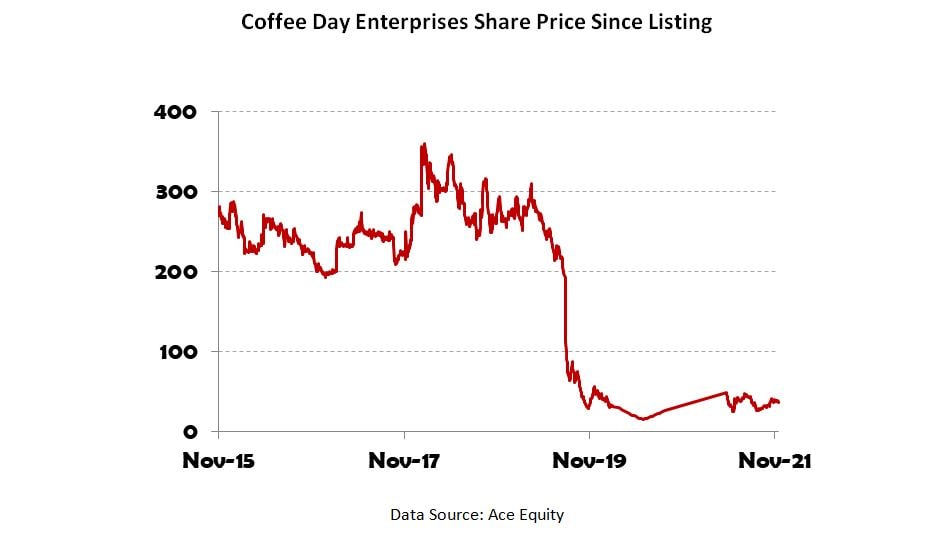 Big IPOs do not guarantee big returns. We saw this in the case of Paytm.

But a similar instance happened way back in 2008 when Reliance Power came out with its mega Rs 11,560 crore IPO.

Due to massive demand, the issue price for the Anil Ambani-owned Reliance Power IPO was fixed at the upper band of Rs 450 for non-retail, and Rs 430 for retail investors.

What's more is that the issue was sold out within the first minute of its opening on 15 January 2008. The IPO had received a record bids over 5 lakh, worth Rs 7.5 lakh crore, and the issue was subscribed more than 72 times.

This IPO was launched at a time similar to today. Demat account openings were at a high and people poured their money to invest in the IPO.

At a time when brokers were convinced and gave thumbs up to Reliance Power's IPO, Equitymaster was in the minority to give a negative view on this IPO, and, boy, were we right!

When the markets crashed, the stock lost 70% of its value in eight months!

The Rs 4,020 crore IPO did not excite investors and got a poor response as the issue saw only 78% subscription on the final day of the bidding process.

Shares of Cairn India have stopped trading since 2017, when the oil producer merged into its debt-ridden parent Vedanta.

Last year in October 2020, UTI Asset Management Company (AMC) made a tepid debut on the bourses, listing at a discount of 14% against the issue price of Rs 554.

It received bids for shares 2.31 times of what was on offer.

The weak listing was on expected lines due to tepid response to IPO and continuous outflow in the mutual fund industry at that time.

The market was not particularly excited about this IPO as the company had a weak balance sheet and poor capital allocation.

Indus Towers (erstwhile Bharti Infratel) backed by billionaire Sunil Mittal, dived 13% in its trading debut after raising about $760 million in 2012.

The company raised over Rs 4,120 crore in the biggest IPO in two years. The IPO was subscribed 1.3 times.

Why Equitymaster is a Contrarian when it Comes to IPOs …

When it comes to IPOs, Equitymaster has not just been a value investor but also an outright contrarian.

Right from Reliance Power IPO in 2008 to SKS Microfinance IPO in 2010 to the IPOs of Coffee Day Enterprises and InterGlobe Aviation, our views were a part of minority.

We do not treat an IPO as anything buy yet another stock that investors could consider for long term investment. So there's no reason for us to compromise on the moat, management quality, and valuations of the company.

That is not how everyone else looks at IPOs. Most people look for listing gains.