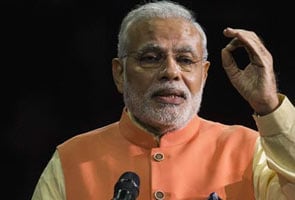 Indore: Prime Minister Narendra Modi on Thursday said $100 billion (Rs 6.1 lakh crore at 1 dollar = 61 rupees) worth of foreign investment is knocking at the doors of India and it is up to the states to lap up as much as they can.

Describing his "Make in India" initiative a "win-win" proposition, PM Modi said the foreign investors should not treat the country merely as a market, but should focus on turning it to a manufacturing hub with a view to increase the purchasing power of Indians.

"$100 billion investments from Japan, China and America have applied for visa. Now it is turn of the states to capitalise on the opportunity. The roads are wide open. The states which are ready can walk away with major share," he said while inaugurating the Global Investors' Summit in Indore.

In the last couple of months, the Prime Minister has visited Japan and the US and launched the 'Make in India' campaign to lure foreign investments into manufacturing sector.

"When we talk about Make in India, then we want to create confidence in the world that there is a huge investment possibility in India. Please do not consider India only as a market... dump goods, sell them and make profits."

Promoted
Listen to the latest songs, only on JioSaavn.com
The focus of the government, he said, is to generate employment by encouraging agriculture, manufacturing and services sector.

The Prime Minister also said states should rise above narrow political considerations on development agenda and that the Centre will extend all possible assistance to them.