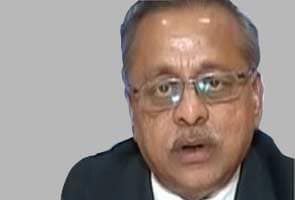 Shares in Reliance Infrastructure corrected nearly 2.5 per cent on Wednesday as the Anil Ambani-led company reported a 13.86 per cent y-o-y drop in net profit at Rs 621 crore for the quarter ended March, 2014. The company also reported a 23.9 per cent drop in its revenue at Rs 4,707 crore, mainly led by a 62 per cent drop in its EPC (engineering, procurement and construction) revenue.

Reliance Infrastructure chief executive Lalit Jalan spoke to NDTV about the company's performance in the quarter under review and its outlook going ahead (Watch Interview).

Here is an edited transcript of the interview:

What is your EPC order book?

Although there is a decline in the EPC revenue, our margins remain in line with what we have guided (8-10 per cent). Total order book at the end of March 2014 stands at Rs 6,600 crore.

What is your position on receivables?

Do you see private players regaining confidence after the new government is formed?

There is already a big change in sentiment. Growth and development will be at forefront for the new government. I think the government will look aggressively to resolve issues related to infrastructure projects so that the entire investment cycle gets kick-started. We are in a very good position to embrace these opportunities.

Do you see bidding interest coming to PPP projects?

The projects which have come out for bidding have been very few. There was clearly a lack of confidence in the private sector in their ability to get approvals. If we see policy action from the government in terms of project clearances, we may very soon see the days of 2007-08.

Are state hurdles for projects likely to be addressed by the new government?

The incumbent prime minister has mentioned about the role of all the states' chief ministers and that of the prime minister to form a kind of 'super committee' where they want to sit together to solve all the problems. Issues like land acquisition and law and order have to be cleared by the state government. If there is cooperation between the Centre and the states, clearly the process will be eased and infrastructure projects can be built and put to service for the citizens of the country.

Is the order activity in India likely to improve going ahead?

Sentiment has already changed. Once clarity emerges in terms of ministry formation, budget announcement and policy action, the same people who were disappointed earlier may go and bid for projects again.

When do you see earnings recovery to start?

In case of infrastructure projects, which are annuity linked, revenue keeps on increasing over the length of the concession period. Ebidta margins are very high and cost doesn't increase at the same pace as revenue. Margins in these projects are back-ended. We have one set of project which are revenue-operational and we have another set of healthy projects which we will build to ensure that that growth momentum is not lost over the next 2-3 years.