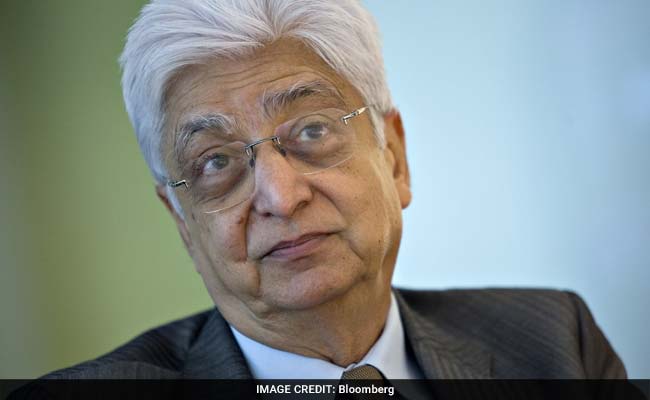 It's hard to overstate the importance of the technology industry to India. Over the past three decades, the IT sector has helped drive the country's economic growth, employed millions and made billionaires out of at least seven founders.

Now the industry is at risk from U.S. President Donald Trump's policies. The administration is promising a clampdown on the work visas India's tech services companies use to service American customers. In the days since the U.S. government took first steps toward visa reform, all of India's highest-profile technology tycoons have seen their net worth eroded.

Azim Premji, chairman of Wipro Ltd. and India's fifth-richest man, and Shiv Nadar, the sixth-richest person in the country and chairman of HCL Technologies, have seen their shares slide. Narayana Murthy, Nandan Nilekani and three other founders of Infosys Ltd., all among the top 100 of India's richest billionaires, have taken a hit too. IT stocks have dropped about 3 percent over that stretch, while the benchmark index has climbed 0.6 percent.

"Whether these changes are a precursor for more radical measures is what is worrying companies," said DD Mishra, a Pune-based research director at Gartner.

Infosys, which reports earnings April 13, may have the most at stake. The Bangalore-based company is most vulnerable to U.S. visa reforms because it has the lowest percentage of local hires in the U.S., Goldman Sachs analysts Sumeet Jain and Saurabh Thadani said in a research note last week. HCL and Wipro also have risks from visa reforms but they hire relatively more Americans, the analysts wrote.

Infosys kicks off earnings season for the industry this week, giving investors a chance to get more insight into the challenges and corporate strategies for addressing them. Tata Consultancy Services, the market leader, is scheduled to report results next week.

The debate has been over the H-1B visa program, which allows companies to bring 85,000 workers into the U.S. from overseas each year. On March 31, just as companies prepared to file applications for next year's allotment, the Trump administration rolled out a series of policy measures making it harder for firms to use the program for computer programmers and announced measures to fight what it called "fraud and abuse."

In parallel, the Justice Department warned employers applying for visas not to discriminate against U.S. workers. All of this was in line with promises made during Donald Trump's presidential campaign to overhaul the program he described as bringing cheap overseas labor at the cost of American jobs and salaries.

From India, those promises look like threats to the economy. Information technology is the largest employer in the private sector, providing a livelihood to nearly 4 million, and contributes about 9 percent of gross domestic product. India's software and services exports total about $110 billion, with nearly two thirds of that revenue coming from the U.S.

Visa uncertainty could wreak havoc with planning and jeopardize profits in the industry. It may also raise risks for customers that depend on such services, from Wall Street banks to retailers and airlines. "Difficulties in getting visas or rising salaries of H-1B employees will have a material impact on companies," said Rostow Ravanan, chief executive officer of Mindtree Ltd., a Bangalore-based outsourcer that uses hundreds of H-1B visas every year.

Several countries around the world are adopting or considering similar policies. That poses a threat to the business model perfected by Indian companies, Ravanan said. "These trends are dangerous because the IT industry and its talent serve the entire world," he said.

Companies have been working on contingency plans. If foreign workers cannot go to the U.S., it will become more expensive to hire local staff. Companies may also try to do more work for American clients from abroad, including India.

Nitin Rakesh, chief executive officer of tech services provider Mphasis Ltd. is optimistic. He said the industry has gone through four or five reincarnations since the outsourcing business began. A Trump crackdown may lead to more innovation in the model.

Promoted
Listen to the latest songs, only on JioSaavn.com
"Through leveraging all the possible technology, including mobility and cloud, the growth opportunities are immense," said Rakesh, warning however that some companies will adapt and others may not. "Growth will not be homogeneous."
© 2017 Bloomberg L.P