The world's biggest lockdown has cost India millions of jobs, resulted in record low economic activity, and fueled the biggest earnings decline in at least six years. Profits at NSE Nifty 50 Index members fell about 15 per cent last quarter from the same period last year, the worst drop since at least 2014, according to Bloomberg-compiled data. About two thirds of the firms in index have announced results for the March quarter so far. Communications, energy and industrials recorded the steepest declines on an adjusted basis. 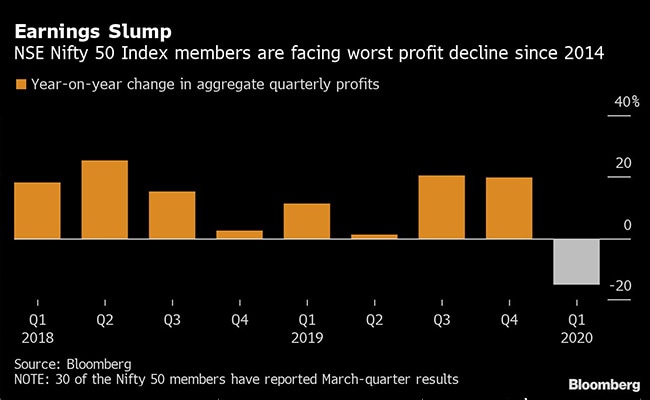 Stay-at-home measures triggered by the coronavirus pandemic has kept most of India's 1.3 billion population indoors since late March, leading to a collapse in business activities. Goldman Sachs Group Inc. expects gross domestic product to contract 5 per cent in the fiscal year through March 2021, which would be India's deepest recession ever. Meanwhile analysts have cut earnings forecasts for the Nifty 50 measure over the next 12 months by 13 per cent since January, as India begins a phased lifting of the lockdown this month. “We are expecting flattish profits, no growth, for the 2021 fiscal year,” said Gautam Duggad, head of research at Motilal Oswal Securities Ltd. He still sees more downside risks of earnings getting cut further “as we move forward and second or third order impacts manifest themselves.”

Analysts expect telecommunications and consumer staples to outperform as the economy reopens, while a slump in capital expenditure and discretionary spending hurts related sectors for the time being.

“The outlook for June is quite uncertain due to Covid-19 as both supply side and demand side issues will mar both topline and bottomline,” said Abhimanyu Sofat, head of research at IIFL Securities Ltd.
The Nifty is at an “important” level right now of about 10,000. As the lockdown starts opening up we see a change in leadership to insurance, rural and telecommunication stocks,” he said.