Dolly Khanna Exited This Penny Stock. Do You Own it?

The ace investor sold stake in a company which has gained 47% so far this year.

What do I mean by top investing gurus of India? Think Rakesh Jhunjhunwala, Dolly Khanna, Ashish Kacholia, and the likes.

These investors have a solid track record of generating returns over their investing careers.

Retail investors often imitate their stock picking process and are on the lookout for the best multibagger stocks.

So, when there's activity as to which stocks these investors bought and sold, retail individuals are all ears.

A select few companies have declared their shareholding pattern for June 2022 quarter. So there has been a reshuffle in portfolio of these guru investors.

One prominent guru investor we track is Dolly Khanna.

In the first quarter, Dolly Khanna increased exposure in this stock. She also exited a couple of stocks. One of them was a penny stock from the fertilizer space.

The latest shareholding pattern of Khaitan Chemicals reveals that Dolly Khanna exited her position in the quarter gone by.

Khaitan Chemicals and Fertilizers trades at a current market price of Rs 95, making it a penny stock.

Who is Dolly Khanna?

Dolly Khanna is a Chennai based investor, who is known for picking lesser-known midcaps and smallcaps. She has been investing in stocks since 1996.

Dolly Khanna's portfolio, which is managed by her husband Rajiv Khanna, is usually inclined towards more conventional stocks in manufacturing, textile, chemical, and sugar stocks.

Why did Dolly Khanna exit her position in Khaitan Chemicals and Fertilizers?

The latest shareholding pattern showed her name missing which means she probably exited the stock when Indian stock market was falling.

However, we can't be sure whether the ace investor sold out her entire holding or she sold out a partial stake. Companies are required to share names of shareholders who own 1% or more shares.

So why did Dolly Khanna sell her stake?

Dolly Khanna had added Khaitan Chemicals in her portfolio during the January-March 2022 quarter. So far this year, the stock has rallied 47%.

At a time when fundamentally strong stocks have also fallen, this stock has managed to deliver close to 50% gains. That's not bad.

What this could mean is Dolly Khanna probably booked profit in the stock after holding it for just one quarter.

The concerns keep on adding up with US reporting red-hot inflation yesterday. Dolly Khanna probably though it's better to stay out and let the volatility tide over.

Another reason could be input cost pressure. The changes in the price of gas and oil influence the price of everything else.

However, for the power-hungry chemical industry, fossil fuels are not only a source of energy but also a raw material feedstock for production. This means the chemical manufacturing industry is the most affected sector by fluctuations in gas and crude oil prices.

This energy crisis has affected all the raw materials of chemical sector.

The industry is cyclical in nature. Raw material cost has started to increase which is evident over the past 2 quarters. This could dampen the prospect of chemical and fertilizer industry in the short term.

How Khaitan Chemicals and Fertilizers has performed recently

On a YTD basis, shares of Khaitan Chemicals have surged 47%.

However, of recent past, the stock is under pressure and has fallen 10% in the past 15 days. 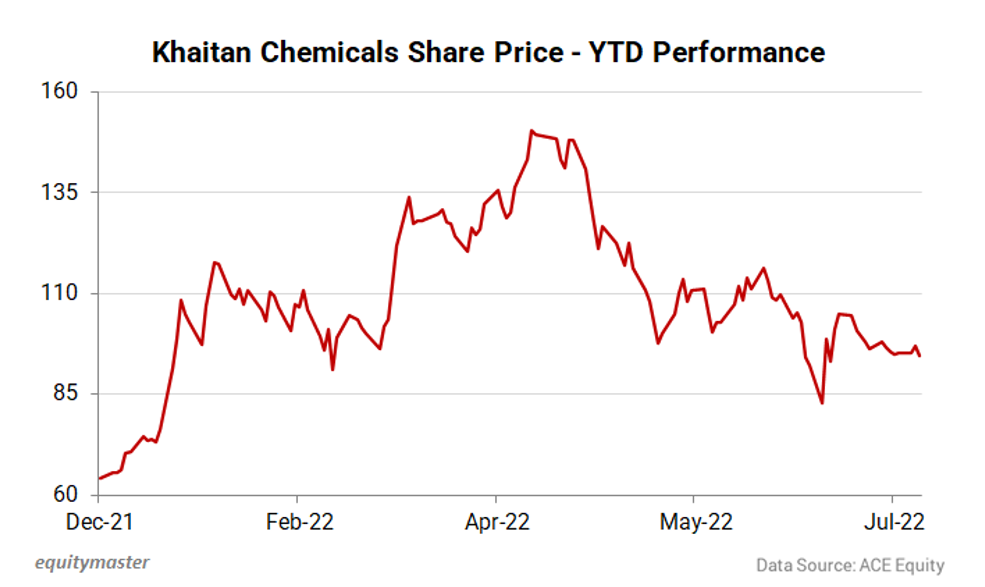 At the current price, the company trades at a PE multiple of 11.5. Its price to book value is 3.7x.

Khaitan Chemicals and Fertilizers is engaged in the manufacturing of single super phosphate fertilisers, sulphuric acid and its variants, processing of oil seed, and selling of wind power.