Cryptocurrencies Have Rebounded Since May Lows, With Bitcoin Hitting $50,000. Here's Why

On Monday, Bitcoin breached the $50,000 mark for the first time since May and other coins - including Ethereum, Cardano's ADA and Dogecoin - also edged higher

After months languishing in the doldrums, cryptocurrencies are surging. On Monday, Bitcoin breached the $50,000 mark for the first time since May. Other coins - including Ethereum, Cardano's ADA and Dogecoin - also edged higher. And it was only a few weeks ago that some strategists were eyeing a possible drop to $20,000 for Bitcoin, months after it had hit an all-time high near $65,000 in April.

Instead, sentiment is rising across the board. Crypto's latest swings are a sign that Bitcoin miners are back in business after a recent Chinese crackdown. At the same time, there is continued evidence of more mainstream acceptance. All of this is happening as the delta variant's surge has muddied the timeline for a normalization of interest rate policy.

"There's been an accelerating background of accumulation of crypto assets in the past couple months," Jonathan Cheesman, head of over-the-counter and institutional sales at crypto derivatives exchange FTX, wrote in an email Monday. "Institutional flows in Bitcoin and Ether as well as a lot of retail activity in NFTs and gaming" are likely contributing, he added.

Here is a look at what is driving the increase - and what could come next:

A Shift in Sentiment

The cryptocurrency world is populated by a cast of characters whose voices can really influence prices. Lately, bullish noises have been boosting sentiment.

Take Elon Musk. Earlier this year, the billionaire caused heads to spin - and helped prices to boost and then plummet - when he said in March that Tesla Inc. would accept payment for its electric vehicles in Bitcoin but backtracked in May. He made his reversal on environmental grounds, expressing concern about the use of fossil fuels for cryptocurrency mining. Following those comments, Bitcoin lost about a quarter of its value in a week.

But here's the latest twist: Over the past few weeks, Mr Musk has been striking a more supportive tone. In late July he said he personally owns Bitcoin, Ethereum and Dogecoin and would like to see crypto succeed.

Superstar investment manager Cathie Wood is another influential voice in this space. A noted crypto bull, she told Bloomberg TV in May that she could see Bitcoin reaching a price of $500,000. More recently, she said she thinks corporations should consider adding Bitcoin to their balance sheets.

About a month ago, all the talk in the cryptocurrency world was of a Chinese crackdown. A ban on Bitcoin mining meant the abrupt shuttering of millions of computers that had been processing the transactions necessary to keep the crypto currency humming. Before the ban, around 65% of the world's Bitcoin mining took place in China.

As computers went offline, the hash rate - a measure of the computing power used in mining and processing - halved in just two and half weeks.

As well as the practical implications, the aggressive moves by China laid bare the fact that the decentralized currency is still at the mercy of governments, which hit sentiment. Bobby Lee, one of the country's first Bitcoin moguls, even said that China's crackdown on cryptocurrencies will probably intensify and may even lead to an outright ban on holding the tokens. And in the U.S., a recent congressional debate over crypto rules added to the uncertainty.

However, the hash rate has rebounded and is up from its July nadir, according to data from Blockchain.com.

That recovery has helped restore confidence in the market that cryptocurrencies can flourish even in the face of opposition from legislators around the world. 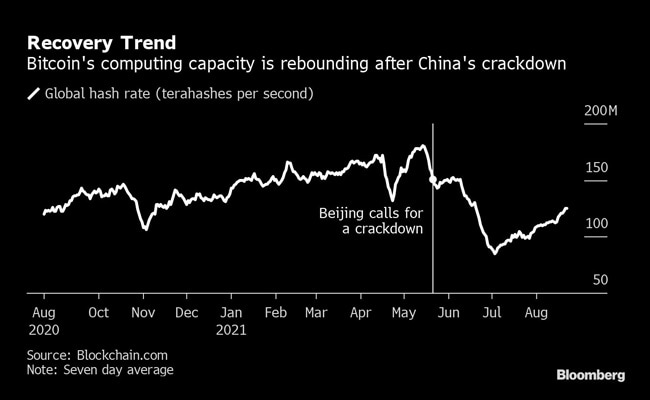 Keep Your Eye on Jackson Hole

Prices of cryptocurrencies, like gold, tend to suffer when there is the prospect of interest rate hikes. The emergence of Covid's delta variant may scramble plans to remove crisis-level monetary policy.

If Federal Reserve Chairman Jerome Powell were to strike a dovish note in his speech at the Jackson Hole conference this Friday, that could boost the currency, Oanda analyst Edward Moya said in a note.

The Kansas City Federal Reserve's annual event, being held virtually again, is traditionally scrutinized for hints on upcoming changes in stance. Some Fed leaders have used it as a platform to explain new initiatives, as Powell did last year in unveiling a new monetary policy framework.

Huge financial and consumer firms over the past year have increasingly been embracing crypto, giving the asset more legitimacy and driving up the price. Banks, brokerages and securities exchanges have been gearing up to meet demand. A watershed moment came in April with the U.S. stock market debut of Coinbase Global Inc., a crypto trading venue that's shooting to establish a digital-money ecosystem.

This summer, there has been growing speculation that Amazon.com Inc. may become involved in the cryptocurrency sector. An Amazon job posting published online in July said the firm was seeking a "Digital Currency and Blockchain Product Lead." After people found out about the post, Bitcoin surged to about $40,000. Amazon shares gained about 1% in New York. The company went on to say that the "speculation" about its "specific plan for cryptocurrencies is not true," but the fact that the world's largest retailer is exploring crypto has big implications for the shadowy and often hard-to-access market.

Walmart Inc. revealed it, too, was looking for some crypto help, with a job posting on Aug. 15 with responsibilities that would include "developing the digital currency strategy and product roadmap" and identifying "crypto-related investment and partnerships." (As of Monday morning, visitors to the website were given a 404 error message.)

As with any investment - or anything, really - it's impossible to predict the future. But analysts do have a few estimations on how breaching $50,000 has changed Bitcoin's prospects, at least in the short term.

Bitcoin is "getting nearer the higher end of what I expect as a new trading range in the low-$40,000s to low-$50,000s," said Rick Bensignor, chief executive officer at Bensignor Investment Strategies.

Daniela Hathorn, an analyst at DailyFx.com, thinks that it may be a while before we see any further bullish momentum because $50,000 is a key psychological level for the currency.

"A pullback towards the $48,000 area would be the first sign of trouble," she wrote in a note on Monday. "But the positive trend isn't in any trouble as long as Bitcoin stays above its 200-day moving average at $45,750. Looking ahead, the key challenge for buyers will be to cement further gains towards $55,000 without losing momentum along the way."

Will Tesla Accept Bitcoin As A Mode Of Payment Once Again? All We Know So Far