Terra investors around the world lost billions of dollars when the algorithmic-stablecoin project crashed but they recovered a small part of their bets when a new token was distributed as compensation. Investors in India arent as fortunate. 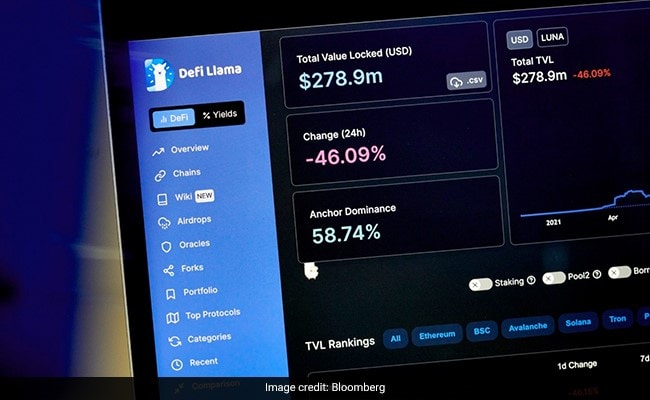 Terra investors around the world lost billions of dollars when the algorithmic-stablecoin project crashed but they recovered a small part of their bets when a new token was distributed as compensation. Investors in India aren't as fortunate.

Because the country's tax system is punitive to crypto investing, TerraUSD and Luna token holders who got the new coin -- known as Luna 2.0 -- in a so-called airdrop face a double whammy. They could be taxed as much as 30% of the value of tokens received and they won't be able to offset any gains in the new token against losses from the previous one, tax experts said.

Under the new crypto tax regime, effective April 1, any income from the “transfer” of a “virtual digital asset” will be taxed at a flat rate of 30%. It does not explicitly mention how airdrops should be taxed, but Jay Sayta, a technology and gaming lawyer, and Manhar Garegrat, executive director of policy at crypto exchange CoinDCX, said the distributions can be seen as income and are subject to the tax.

“The wordings in the law are so vague, including the definition of virtual digital asset and the definition of transfer, that it would be open to litigation of challenge by the tax department,” said Sayta. “They normally consider the most aggressive view possible with a view to collecting higher taxes, notwithstanding the fact that such a view may result in absurdity.”

There were over 160,000 investors that held Luna on the exchange on May 9 and by May 15 the number grew by 77% in India, according to Rajagopal Menon, vice president at Binance-owned WazirX. It's unclear how many more investors held TerraUSD.

“The increase can be attributed to a surge in buyers post 9th May where the buyer-to-seller ratio was 5:1. In terms of the volumes, 11th and 12th May saw the highest volumes in Luna – 53 million USDT combined for both days,” Menon wrote in an email.

Anoush Bhasin, founder of crypto asset tax advisory firm Quagmire Consulting, said that the Luna 2.0 airdrops may fit into the existing definition of gifts so a flat 30% tax may not apply but gifts are taxed based on a taxpayer's income range, or slab rate.

Whether considered as a gift or income from crypto, experts Bloomberg spoke to said that under the new tax regime there will be two stages of taxation. First, at the time of receiving the airdrop, a gift tax or a flat 30% tax, will be levied based on the valuation of tokens at time of credit. Second, if the tokens are sold, a flat 30% tax will be applied on the incremental income earned regardless how the tokens are categorized, if the tokens rose in value.

“There could be a scenario where people have received tokens above INR50,000 and if its treated as gift, you'll have to pay taxes on it, but by the time they sell it if the price falls then you'll actually realize lesser money, and you may actually go more out of pocket in paying taxes than what you recover and that is the worst case scenario for them as Luna 2.0 was actually issued to compensate,” said Meyyappan Nagappan, leader, digital tax at Nishith Desai Associates.

The quandary is reflective of an Indian government that's long had an uneasy relationship with crypto. The tax structure unveiled this year treats digital assets unfavorably compared with stocks and bonds, leading to warnings of a crypto exodus. Trading has withered as a government-backed payment network was made unavailable to cryptocurrency exchanges, leaving clients unable to fund their accounts with rupees.

An airdrop is a way of sending a token directly to wallets and can be used for various purposes. Airdrops are a common tool for early-stage crypto projects to attract users by offering free tokens and can be used to reward early adopters.

“Airdrops are a way of showing gratitude,” said Harsh Rajat, co-founder of Ethereum Push Notification Service or EPNS, which airdropped its native token PUSH to early adopters and those who donated to the project last year. “In web3 the concept is that this is made by the people and for the people, if people are testing out a protocol, spending their time then you should be rewarded some rights to the protocol either through governance or utility of token and that's why airdrops exists.”

In the case of Terra, backer Terraform Labs used an airdrop to compensate investors and revive its project after the stablecoin collapsed, sending the value of sister token Luna spiraling to near zero, wiping out billions of dollars of wealth. Terraform Labs used a snapshot of the old blockchain, now known as Terra Classic, to determine which user wallets should receive Luna 2.0, and how much.

Rajat said that global projects won't stop giving airdrops but they will find it difficult to do them in India since crypto investors there may stand to lose a lot of money.