The S&P BSE Bankex and Finance indices shed 19.47 per cent and 18.86 per cent respectively.

Until Thursday, both market barometres were staring at weekly losses of around 17% each

Domestic equities suffered a weekly loss of 12 per cent with little respite at the end as the financial markets around the globe digested the severity of the coronavirus (COVID-19) pandemic. The S&P BSE Sensex index lost a total 4,187.52 points during the period, marking a decline of 12.28 per cent, and the broader NSE Nifty 50 benchmark shed 1,209.75 points - or 12.15 per cent - as the markets regained some ground on the last trading session of the week. Banking and financial services stocks were the worst hit amid an across-the-board market selloff. Analysts say the recent recovery in the markets may be short-lived as the country enters a lockdown in its fight against the deadly COVID-19 outbreak.

The spread of the coronavirus pandemic has sent the world's financial markets into a tailspin despite some of the biggest emergency stimulus measures since the global financial crisis announced by dozens of central banks across Europe, the Americas, Asia and Australia.

Policymakers the world over have announced hefty cuts in interest rates to support economic activity against the potential threat of the deadly virus to world business.

While the NSE's Nifty Bank index - comprising stocks of 12 major lenders in the country including State Bank of India (SBI), HDFC Bank and ICICI Bank - shed a whopping 5,624.60 points for the week, marking a dive of 19.27 per cent. The S&P BSE Bankex and Finance indices shed 19.47 per cent and 18.86 per cent respectively. The financial sector has a weightage of 42 per cent in the benchmark Nifty index.

All of the 11 sectoral gauges on the NSE and 19 on the BSE suffered losses. 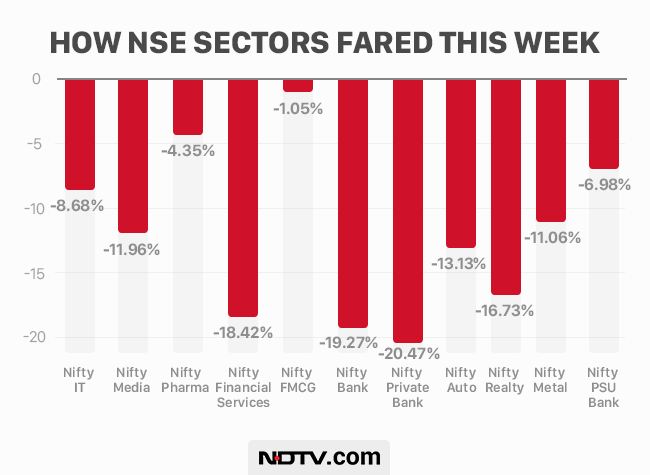 In terms of market capitalisation, the damage was not limited to large cap stocks alone, as midcap as well as smallcap segments also suffered losses. The S&P BSE Midcap and Smallcap indices shed 11.84 per cent and 14.01 per cent respectively.

Until Thursday, both market barometres were staring at weekly losses of around 17 per cent each.

Friday's bounce-back was the strongest one-day gain for the Nifty in more than six months, after days of highly volatile moves in the markets. The NSE's India VIX index - which measures the markets' expectation of volatility in the near term - shot up to levels last seen during the aftermath of the 2008 global financial crisis, closing at 67.10 on Friday.

Some say an extended period of volatility cannot be ruled out in the domestic markets over the next few sessions as investors around the globe assess the strength of policy measures against the coronavirus crisis.

"We might have seen a short term bottom last week, but the damage done to economies globally needs to be assessed based on the impact of ongoing lockdowns and the impact on economic activity. India was already on a sticky wicket and hence the monetary and fiscal measures which the government might take post the crisis will be keenly watched," said Prasanna Pathak, head-equity and fund manager at Taurus Mutual Fund

More than three-quarters of economists based in the Americas and Europe polled by news agency Reuters the world is already in a recession as economic expansion has ended. Economists have repeatedly cut their growth outlook over the past month and have increased their forecast probabilities for recession in most major economies.

"I believe that the recovery will take a long time with lingering pain on the economy front as well as investor-front."

Back home, the Reserve Bank of India announced fresh bond purchases worth Rs 10,000 crore via open market operations, in a bid to ensure liquidity and stability across market segments. However, that move came after its status quo on key interest rates shattered the expectations of many, who had hoped the central bank to follow its counterparts' footsteps due to the spread of the coronavirus.

RBI Governor Shaktikanta Das, however, did say the timing of any interest rate action would be based on the "evolving situation", at a surprise press conference which had fuelled hopes for an emergency rate cut. The RBI has several other policy instruments and tools that it can deploy as required, the Governor said.

The government announced the establishment of a special task-force to shield the economic activity in the country from the coronavirus outbreak.

"There have been several policy announcements to protect the downside of the coronavirus (COVID-19) crisis on the stock markets as well as global economies. However, the reaction of the markets has not been significantly positive mainly due to the fact that shutdowns of the economies have just started and visibility of revival is low at this stage," said Sandip Sabharwal, a Mumbai-based fund manager.

Meanwhile, markets regulator Sebi halved position limits for certain stock futures, restricted short-selling of index derivatives and raised margin rates for some shares in a bid to curb "abnormally high" volatility amid the coronavirus pandemic. Those measures came soon after global markets plummeted as emptying hotels and airports, and the closure of malls and offices threatened to bring the world's economies to a grinding halt.

Analysts expect the government and the RBI to announce bolder measures over the next few weeks.

"The RBI and the government have taken very calibrated measures so far and kept the gun powder dry. This is unlike many other countries, where the measures are unprecedented and whole-hog with little ammunitions left for later use," said Mr Pathak.

Central and state governments completely shut down 75 districts across the country and Indian Railways, which carries more than 2.5 crore commuters a day, cancelled all passenger train services until March 31. Automobile manufacturers - including Maruti Suzuki India, Tata Motors and Mahindra & Mahindra - suspended car production in view of the coronavirus outbreak.

Analysts say the shutdown is likely to hamper business across sectors.

"With the measures that Sebi has announced on the derivative markets combined with some stability in global stock markets we should see first volatility come down and then a recovery in the markets," said Mr Sabharwal.

Time To Nibble At Stocks?

"In these times of uncertainty, companies catering to our daily essential needs like FMCG etc would do well. Also, hospitals, diagnostic companies and pharma companies are expected to outperform," said Mr Pathak.

"In all probability, the Nifty level of 7,800 (hit on Thursday) should hold and should be a bottom. We could see some days of sideways consolidation... The recovery will be rapid once the crisis blows over as interest rate cuts and government stimuluses feed into the markets," Mr Sabharwal added.

How Nifty 50 Stocks Fared This Week