Why Reliance Has Cut Pay At Oil Unit, No Salary For Mukesh Ambani

Lockdown of billions of people by governments across the world to contain the pandemic is leading to a gloomy outlook for global oil demand.

Reliance Industries Ltd., India's biggest company, plans to cut salaries of employees in its oil and petrochemicals business after a slump in fuel sales reduced revenue, people with knowledge of the matter said.

The owner of the world's largest refining complex will cut wages by 10 per cent for all employees earning more than Rs 15 lakh ($20,000) a year, the people said, asking not to be identified citing rules. Salaries of directors on the company's board, and senior executives will be cut by as much as 50 per cent.

The payment of bonuses for the year ended March, normally paid in the June quarter, has also been deferred, while Chairman Mukesh Ambani won't get any salary at all this year, the people said.

Loss of demand for refined oil products and plastics has put pressure on the hydrocarbons business forcing the company to reduce costs, Reliance Industries' Director Hital R Meswani wrote in a letter to employees on Wednesday, the people said. A spokesman at Reliance declined to comment.

Reliance's net income fell 39 per cent in the quarter through March, mainly due to a one-time inventory loss of Rs 4,245 crore ($565 million) in its energy businesses due to a drop in oil prices along with an "unprecedented demand destruction due to Covid-19." 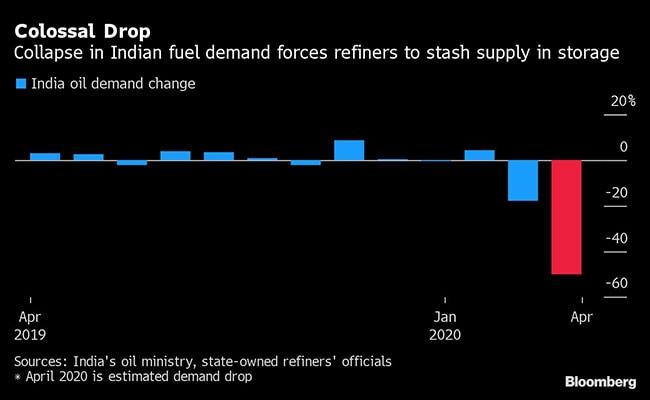 Oil majors globally are also slashing dividends and cutting costs to conserve cash. Norway's Equinor ASA became the first large oil company to cut dividends followed by Exxon Mobil Corp. which froze its dividend for the first time in 13 years and slashed $10 billion in spending. BP cut capital spending for 2020 by 25 per cent from its initial full-year guidance and plans to reduce cost by $2.5 billion.

Lockdown of billions of people by governments across the world to contain the pandemic is leading to a gloomy outlook for global oil demand. OPEC expects sales of its crude to fall to the lowest in three decades and the International Energy Agency predicted that oil use would slump by a record this year and potentially make 2020 the worst in the market's history.

Oil consumption in India, the world's third-biggest market, is set for a unprecedented slump in April amid an extended lockdown that has shut the Indian economy.

The country's refiners had to slash operating rates to less than 50 per cent at some units to counter the fall that pushed storage capacity to almost 95 per cent -- including those in the 66,000 pump stations nationwide. A global glut amid weak demand and excessive production hit exports too. The world's biggest independent oil storage company, Royal Vopak NV, has leased out almost all available space to store crude and refined fuels, it had said earlier this month.

Reliance's export focused refinery operated only at 85 per cent of capacity last month. Oil refiners are hunting for vessels to store jet-fuel and gasoline that nobody is buying, sending freight rates sharply higher, an indication that the global refining system is fast approaching a breaking point.