Fuel Sales Up By Over 70% From April to May, Sign That Worst May Be Over

Trucks returned to the roads and motorists jumped in their cars to drive to work following the easing of some lockdown restrictions.

A boost in Indian fuel consumption for everything from diesel to gasoline may signal the worst of the virus-driven demand crash is over.

Fuel sales surged during the first half of May compared with the same period last month as trucks returned to the roads and motorists jumped in their cars to drive to work following the easing of some lockdown restrictions. Demand for jet fuel rose the most over the two-week period as the country deployed planes to bring back hundreds of thousands of stranded citizens across the world.

The country's fuel consumption fell to the lowest in more than 12 years last month as the world's biggest lockdown kept more than a billion people at home. A return to pre-virus demand levels is expected to be slow and long, with the nation extending some restrictions until the end of May due rising infections and Goldman Sachs Group Inc. predicting the country will experience its deepest recessionever with a plunge in second quarter gross domestic product. 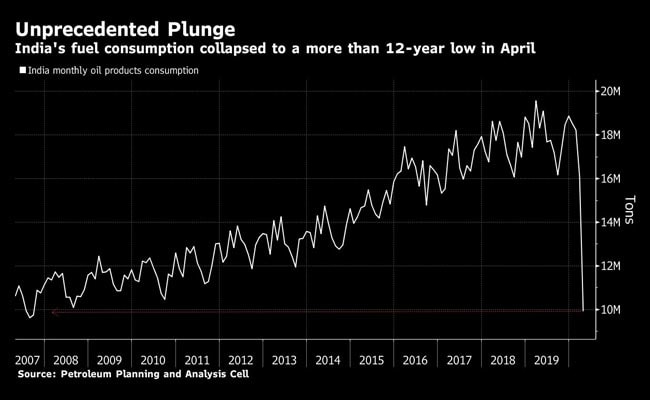 Diesel sales by the country's top three fuel retailers from May 1-15 increased by 75 per cent compared with the same period in April, while gasoline climbed 72 per cent and jet fuel almost doubled, according to preliminary data from officials with direct knowledge of the matter.

However, consumption is still down from the same period last year. Jet fuel sales are about 87 per cent lower, while diesel is down by 38 per cent. The only product showing monthly and yearly gains is liquefied petroleum gas, used for cooking, after authorities stocked up on supplies for lower-income people.

Spokespeople for Indian Oil Corp., Bharat Petroleum Corp. and Hindustan Petroleum Corp., which account for more than 90% of the nation's fuel sales, couldn't immediately comment on the provisional sales data.

There Is Need For Liquidity In Market, Says Nitin Gadkari