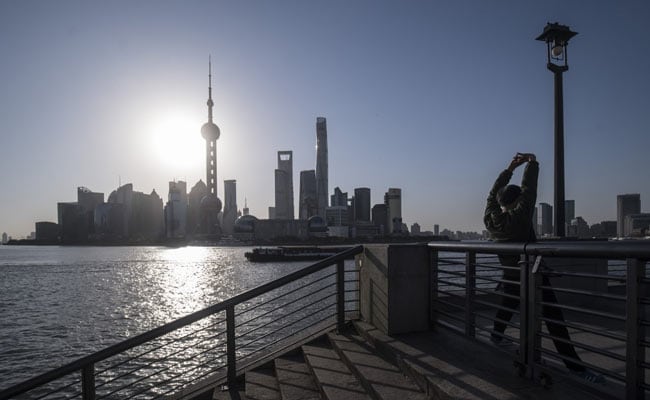 China's gains mean it increased its share of the world economy to 14.5 per cent

China's economy recovered to pre-pandemic growth rates in the fourth quarter, propelling it to a stronger than expected full-year expansion of 2.3 per cent and making it the only major one to avoid contraction.

Gross domestic product climbed 6.5 per cent in the final quarter from a year earlier, fueled by stronger-than-expected industrial output, the statistics bureau said Monday. Economists surveyed by Bloomberg had predicted 6.2 per cent growth for the quarter and 2.1 per cent for the full year. 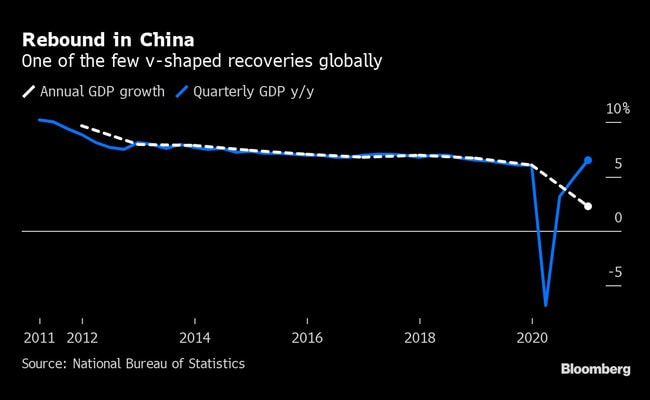 The recovery was aided early on by fiscal and monetary stimulus that boosted investment in infrastructure and real estate. Once China had virus cases under control and factories were able to resume production, growth was spurred by strong overseas consumer demand for Chinese exports, especially medical equipment and work-from-home devices.

"The quarter really seems to have shown the economy ended the year on a strong note, manufacturing is doing well," Cui Li, head of macro research at CCB International Holdings in Hong Kong said in an interview with Bloomberg Television. The softer-than-expected retail sales data in December may reflect the cooler weather and the resurgent virus in northern parts of China as some cities enforce new restrictions to control the outbreak.

The onshore yuan strengthened as much as 0.06 per cent to 6.4779 versus the dollar after the release of GDP growth figures, while the ChiNext Index of small caps gained 1.6 per cent. The yield on the most actively traded contract of 10-year government bonds gained 2 basis points to 3.165 per cent, set for the highest in two weeks.

"The Chinese economy accelerated to a strong finish to 2020, though challenges at the start of 2021 could put a damper on growth."

Data for December suggests that the gap between demand and supply is opening up again, and this may reflect the impact on consumption from recent viral outbreaks.

Emerging from the pandemic larger than when it started is a capstone to a dramatic year for the world's second largest economy, which began 2020 with a historic first-quarter slump when the coronavirus lockdowns brought most activity to a halt.

With global output likely contracting 4.2 per cent last year, China's gains mean it increased its share of the world economy to 14.5 per cent, according to World Bank estimates, compared with 22 per cent for the U.S. Based on projections from the International Monetary Fund, China will now overtake the U.S. by 2028, two years earlier than previously predicted, according to Nomura Holdings Inc.

Economists expect China's GDP will expand 8.2 per cent this year, continuing to outpace global peers, even as other large economies begin to recover with vaccines being rolled out. 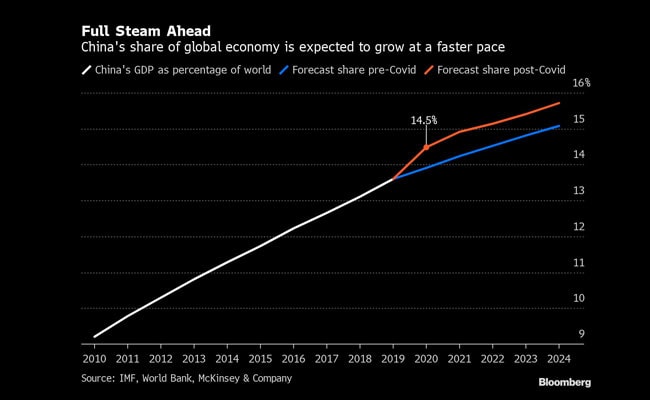 The ongoing recovery in 2021 will depend on whether China can prevent a large-scale spread of virus infections, and on whether it can pass the baton of spending from local governments and large state companies to smaller businesses and consumers. Household spending and investment by manufacturing companies has lagged overall growth in 2020.

An increasingly tense trade relationship with the U.S. could also weigh on the outlook. In his final weeks in office, President Donald Trump has tightened restrictions on Chinese businesses to curb the nation's dominance in high-tech industries, roiling financial markets. It's still unclear how the incoming administration under Joe Biden will navigate those issues.

Global demand for Chinese-made goods is expected to remain strong as the pandemic continues to keep large parts of the world's population locked down. Already the top exporter, the value of China's goods shipments increased 3.6 per cent in 2020, according to official data. Imports declined 1.1 per cent, resulting in a $535 billion annual trade surplus, the highest since 2015.

The fiscal and monetary stimulus to support the economy through the pandemic has been accompanied by a surge in debt, a development that authorities are now seeking to address as the recovery takes hold. At a December meeting to lay out economic goals for 2021, the ruling Communist Party signaled that stimulus would be gradually withdrawn, although it would avoid any "sharp turns" in policy.