The relentless plunge in China's stocks has burnished the appeal of their biggest emerging-market rival India, spurring a historic divergence. 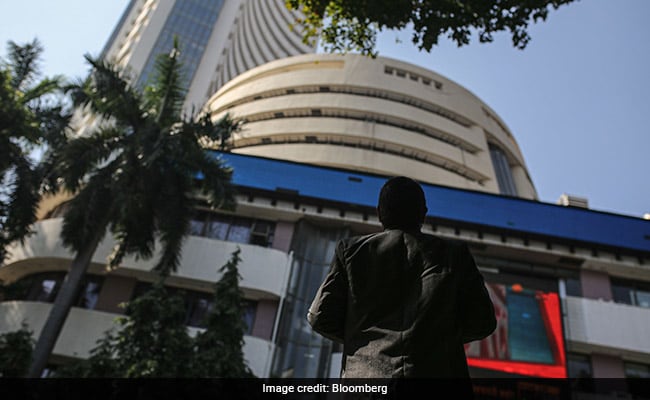 Indian equities have outperformed Chinese stocks by 33%, a historic divergence

The relentless plunge in China's stocks has burnished the appeal of their biggest emerging-market rival India, spurring a divergence that's rarely been seen before.

The MSCI India Index rallied almost 10 per cent in the just-ended quarter, compared with a 23 per cent slump for the MSCI China Index. The 33-percentage point outperformance by the India gauge is the biggest since March 2000.

Beijing's Covid Zero pursuit, regulatory crackdowns and tensions with the West have led to a $5 trillion rout in Chinese stocks since early 2021. And India -- long dubbed the “next China” -- has become an attractive alternative with economic growth that's forecast to be the fastest in Asia.

Market veteran Mark Mobius has allocated a higher weight to India than China since the start of this year. Jupiter Asset Management says some of its emerging-market funds have India as their largest holding. M&G Investments (Singapore) Pte has made a “greater allocation” to India in 2022. 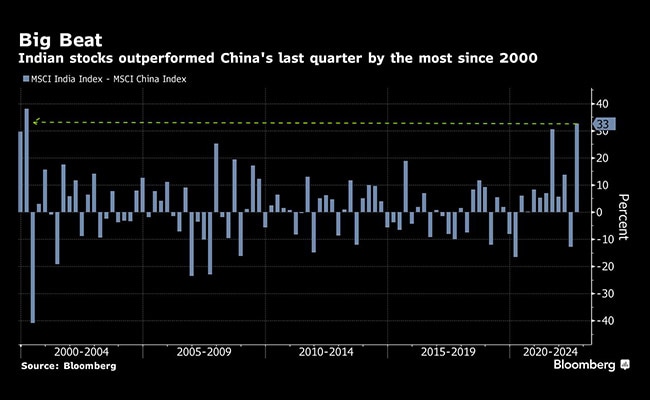 India's expanding domestic market means the country can weather a looming global recession better than most other emerging markets, money managers say. In the longer term, China's decoupling with the US may also pave the way for Indian firms to boost their presence worldwide.

China's “draconian lockdowns continue to impact these supply chains, so the clamor for an alternative has been rapidly gaining favor,” said Nick Payne, a London-based investment manager for global emerging-market equities at Jupiter. “India is the key candidate to fill that role, in an approach that's been dubbed China+1.”

The big divergence between the two stock markets started to take place in February 2021 as tightening liquidity conditions in China contributed to the unwinding of a two-year rally in equities. Indian stocks, meanwhile, kept hitting record highs thanks to an unprecedented retail investing boom.

The aggregate market value of firms included in the MSCI China Index has dropped by $5.1 trillion since then and the gauge closed Friday at its lowest level since July 2016. The MSCI India Index -- which reached an all-time high earlier this year -- has added about $300 billion.

A long-term correlation between the two gauges has been negative since November, the longest stretch on record. 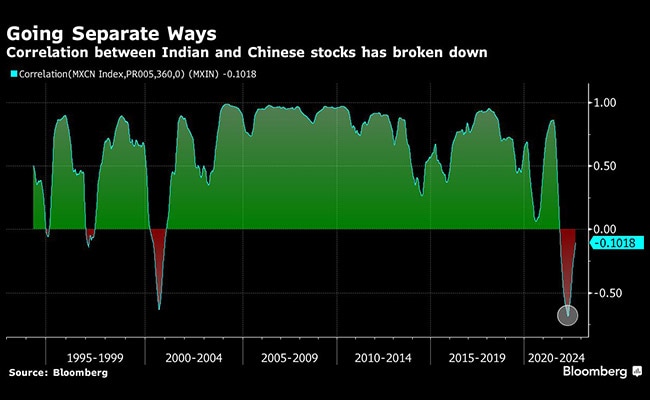 Investor positioning has also diverged. Global EM Fund allocations to India are at a record high while those to China are recovering modestly from a sharp drop in the past few quarters, according to Cameron Brandt, director of research at EPFR Global, a Cambridge, Massachusetts-based research firm.

“The increasing allocation of investor capital both to India-only and to Asia ex-China funds hints that this shift is still in its early stages,” said Vikas Pershad, a fund Manager at M&G Investments. “Some of the barriers to investing in China appear to be structural and longer lasting than expected.” 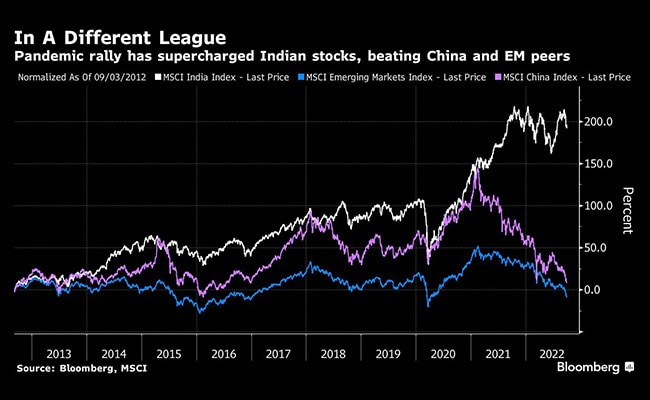 To be sure, months of outperformance has made Indian stocks the most expensive in Asia on an earnings-based valuation. This has yielded caution from some investors, with the Reserve Bank of India's interest-rate hikes also a factor that could weigh on market outlook.

China, on the other hand, has potential for a big upswing once the economy reopens from Covid restrictions. Its stocks listed in Hong Kong are trading at the cheapest ever by one metric. 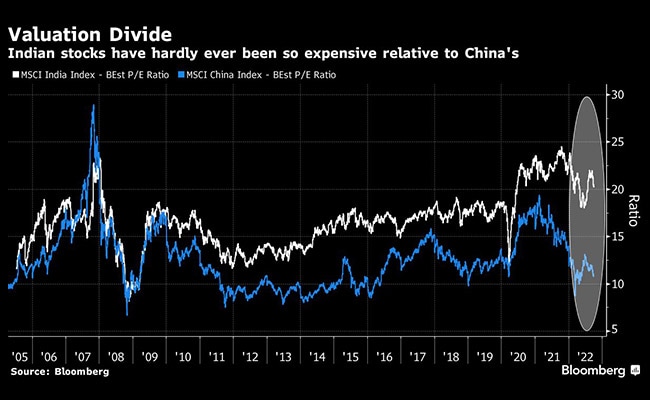 Still, investors focused on India's longer-term growth story hold strong convictions. Economists surveyed by Bloomberg expect the economy to grow about 7% in the fiscal year that ends next March, more than twice the pace of China's in 2022.

Mark Mobius, co-founder of Mobius Capital Partners, said India's large and younger population coupled with a favorable environment toward private enterprise means it will be growing faster than China in the coming years.

Major global companies have been taking advantage of the South Asian country's industrial prowess. Apple Inc., which has long manufactured most of its iPhones in China, began making its new iPhone 14 in India sooner than anticipated following a smooth production rollout. Citigroup Inc. is targeting India as one of its top markets to expand globally.

“We think this is really India's moment. A lot of people are invested,” said Julia Raiskin, head of Asia Pacific markets at Citi.

With its rising market clout, India's weight in the MSCI Emerging Markets Index has increased by almost 7 percentage points in the two years through September. Meanwhile, that of Chinese and Hong Kong stocks combined has fallen by more than 10 points. 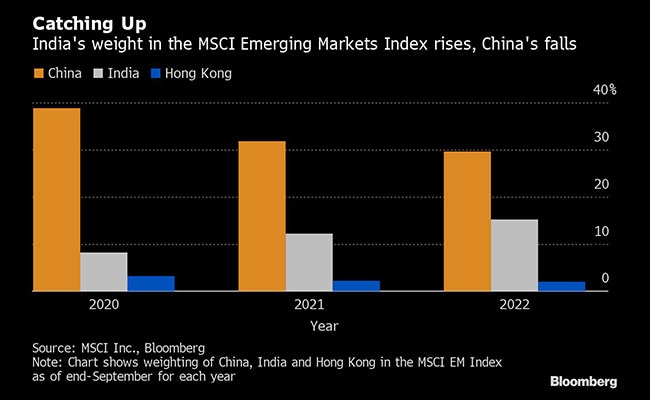 “As a stock market, India is home to some of the highest quality companies in the region, with some of the most capable management teams anywhere in Asia,” she said. “Segments where India excels include financial services, consumer goods and services and health care.”

RBI Imposes Fines Worth Rs 73 Crore In 30 Months, But No Details On Violations: Report