China's 2017 GDP Accelerates For The First Time In Seven Years

China's growth grew faster than expected in the December quarter of 2017 defying concerns that intensifying curbs on industry and credit would hurt expansion. 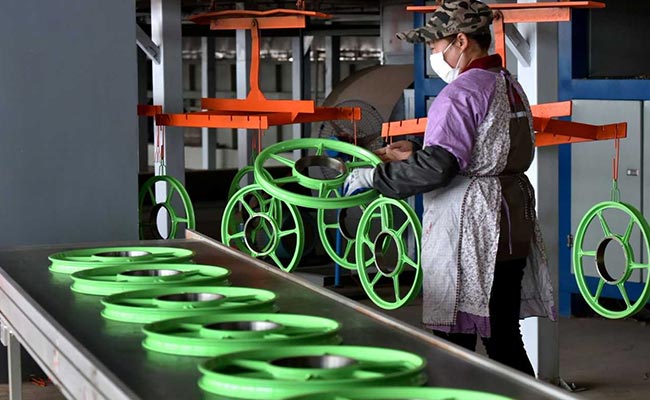 China's GDP grew 6.8 percent in the December quarter from a year earlier

Beijing: China's economy grew faster than expected in the fourth quarter of 2017, as an export recovery helped the country post its first annual acceleration in growth in seven years, defying concerns that intensifying curbs on industry and credit would hurt expansion. The official growth figures released on Thursday are welcome news for Beijing policymakers who are looking to cut debt and pollution in older industries without stunting growth in the world's second-largest economy.

China's gross domestic product grew 6.8 percent in the October to December period from a year earlier. That was better than the 6.7 percent growth forecast by analysts in a Reuters poll and unchanged from the previous quarter.

The headline numbers and signs of property market resilience support economist views that fundamentals will remain intact in 2018, although some see headwinds from tighter regulations, U.S. trade protectionism and a softer consumer sector.

"The risks that we worried about in 2017, for example overcapacity cuts having a negative impact on GDP, did not happen because new sectors are actually coming out to help production to grow."

Growth for the 2017 full year picked up to 6.9 percent year-on-year, the first annual acceleration for the economy since 2010. The annual growth easily beat the government's 2017 target of around 6.5 percent and quickened from 6.7 percent in 2016, the weakest pace in 26 years.

Investment by private firms rose 6 percent in the Jan-Dec period, up from 5.7 percent growth in January to November, a sign that the private sector outlook may be improving.

A synchronised uptick in the global economy over the past year, driven in part by a surge in demand for semiconductors and other technology products, has been a boon to China and much of trade-dependent Asia, with Chinese exports in 2017 growing at their quickest pace in four years.

With fixed asset-investment growth at the weakest pace since 1999, exports helped pick up the slack.

But there could be rising headwinds to further expansion of China's net exports this year.

China's excess production capacity has emerged as a major trade irritant for the world's leading economic powers, prompting them to consider new steps to protect domestic industries and jobs from a flood of Chinese imports.

China's exports and imports growth slowed in December after surging in the previous month.

Economists say growth momentum in the economy is likely to weaken this year as firms face higher borrowing costs, the government tries to rein in credit and policymakers step up a war on pollution that has hurt the industrial sector in many parts of the country.

"The priority this year is to control risks, especially financial risks. This will, to some extent, affect financing of the real economy. I think growth will be 6.6 to 6.7 percent," said Wang Jun, chief economist at Zhongyuan Bank in Beijing.

Retail sales growth of 9.4 percent was the slowest rate since February 2006, down from 10.2 percent growth in November and badly missing forecasts.

There were some positive signs in the household sector in 2017, however, with disposable income growth picking up to 7.3 percent from 6.3 percent in 2016, and final consumption playing a bigger role in driving overall growth last year versus investment than in 2016.

"The decline in December retail sales growth is mainly due to slowing auto sales last month. The data is a reflection of consumption of physical goods, but right now consumption growth is in services, which is not included in the data," said Zhang Yiping, an economist at China Merchants Securities in Shenzhen.

"I don't think retail sales can reflect the trend in consumption any more."

Chinese provinces and cities have long been suspected of cooking up numbers, with the focus on local government officials, whose performance is often assessed based on how well their respective economies have performed.

The head of China's statistics bureau Ning Jizhe told reporters on Thursday that China will look into reports of irregularities in regional economic data, and will deal with any impropriety according to the law.

Capital Economics senior China economist Julian Evans-Pritchard believes the official numbers are hiding the true extent of some of the economy's soft spots.

"We think tight monetary conditions and slowing credit growth will continue to weigh on the pace of economic expansion in coming quarters," Evans-Pritchard said in a note.

"Indeed, we expect growth to average a mere 4.5 percent this year, though investors will probably need to look beyond the official GDP figures for evidence of this."

(Except for the headline, this story has not been edited by NDTV staff and is published from a syndicated feed.)
Comments
ChinaChina growth