Ahead of Budget Presentation, Halwa Ceremony Held At Finance Ministry

Budget 2021: While the traditional ceremony marks the commencement of the printing process of the government's Budget document, this year's budget will be delivered in paperless form 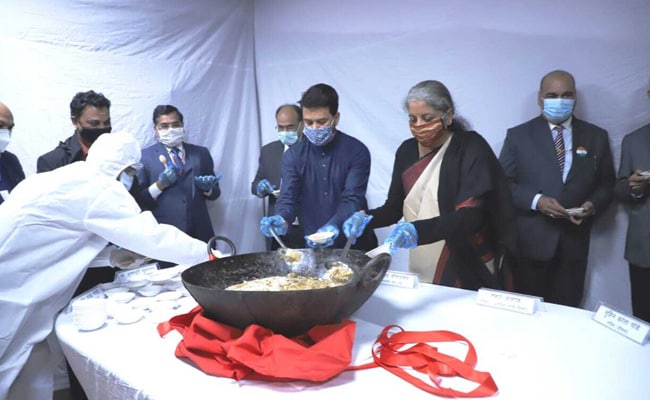 Budget 2021: Halwa ceremony was held at North block, Ministry of Finance on January 23

Budget 2021 - Halwa Ceremony 2021: The traditional ‘halwa ceremony' marking the final stage of Budget 2021-22, was held on Saturday, January 23, at the Union Finance Ministry headquarters at North Block in New Delhi. While the traditional ceremony marks the commencement of the printing process of the government's Budget document, this year's Union Budget 2021-22 will be delivered in paperless form for the first time ever, on February 1, 2021. Finance Minister Nirmala Sitharaman and Minister of State Anurag Thakur took part in the halwa ceremony. (Also Read: Budget 2021: Budget Will Be Paperless For The First Time Ever )

#WATCH | 'Halwa Ceremony' held at Finance Ministry in Delhi to mark the beginning of printing of documents relating to Union Budget 2021-22. pic.twitter.com/a8rv20OhYt

A customary halwa ceremony is performed every year before the lock-in process of the Budget preparation begins. According to the ritual, an Indian dessert or sweet dish is prepared in a large vessel and served to the officials of the Finance Ministry. The dessert is served to all those who are directly associated with the Budget making process. The officials are then required to stay in the north block of the Finance Ministry for around 10 days. The lock-in process is observed to maintain the secrecy of the upcoming budget and prevent any leaks before it is presented in the Parliament.

At the halwa ceremony, the Finance Minister Nirmala Sitharaman was accompanied by Minister of State for Finance and Corporate Affairs Anurag Singh Thakur, Dr A.B. Pandey, Finance Secretary and Secretary (Revenue), T.V. Somanathan, Secretary, Expenditure, Tarun Bajaj, Secretary, Economic Affairs and other top officials of the Ministry of Finance. Due to COVID-19 pandemic restrictions, this year the halwa ceremony was supposed to remain canceled, but the government went ahead with it.

On the occasion, Finance Minister also launched a Union Budget Mobile App for quick and hassle-free access of Budget documents by Members of Parliament as well as the general public. This is the first time in the history of independent India that official budget papers will not be printed.