Budget 2020: What Fiscal Deficit Is And Why It Is Important To Contain It

Budget 2020: Fiscal deficit occurs when a government collects lesser money than it spends

Fiscal deficit, by definition, is the difference between a government's revenue receipts plus non-debt capital receipts (NDCR) and its total expenditure. But what does that mean? Fiscal deficit occurs when a government collects lesser money - in terms of personal and corporate taxes, GST, market loans and NDCR (money received from sale of old assets) etc. - than it spends, on items such as central sector schemes, salaries of employees, subsidies, payments to states and so on. In other words, a deficit occurs when a government spends more money than it receives.

But why is there so much emphasis among economists to contain fiscal deficit at a certain level?

According to Suvodeep Rakshit, senior economist at Kotak Institutional Equities, there are three reasons that make it important to keep fiscal deficit in check: to ensure macro stability, to reduce crowding out of the private sector, and to reduce risk of ratings downgrades.

“A higher fiscal deficit will consequently push the government to borrow more, thereby putting pressure on bond yields which could result in higher overall lending rates as well,” Mr Rakshit told NDTV in an email response.

“Higher government borrowing also reduces the pool of available funds which could be lent to or invested in other businesses, thus increasing the risk of crowding out private investment,” he explained.

Simply put, fiscal deficit indicates how much extra money the government needs, over and above its collections, to meet its budgetary expenses.

For example, the Union Budget worth Rs 27.86 lakh crore presented in July 2019 pegged fiscal deficit at Rs 7,03,760 crore (3.3 per cent of GDP). The lion's share of that was estimated to be funded by market borrowings, such as government securities and treasury bills worth Rs 4,48,122 crore.

In the current financial year, there has been risk that the government will slip on its targets and put additional pressure on the bond market, Mr Rakshit of Kotak Institutional Equities added. 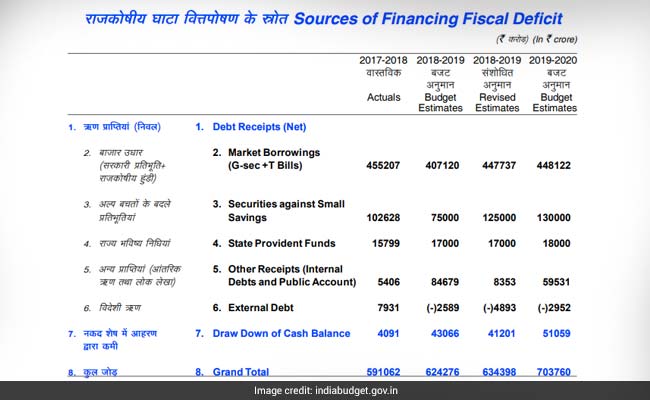 Besides market borrowings, components such as securities against small savings, state provident fund and external debt also help a government meet its fiscal deficit, or the shortfall in the money required for meeting expenses. 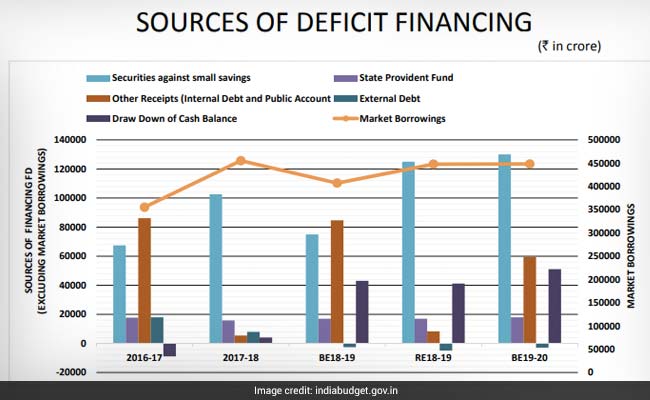 Here are few other terms that are helpful in understanding the concept of fiscal deficit:

By definition, revenue deficit is the excess of revenue expenditure over revenue receipts. A revenue deficit occurs when actual revenue collected by government falls short of Budget estimates. In Budget 2019, the revenue deficit was estimated at Rs 4,85,019 crore in 2019-20, up 18 per cent compared to revised estimates of Rs 4,10,930 for the previous financial year.

What is fiscal consolidation?